Heart of gold Astoria resident Michael Zezima has been aiding homeless women across the city since October, delivering care packages full of supplies.

The idea first came to him about a year ago, according to an interview Zezima had with QNS. However it only came to fruition after Michael encountered a homeless woman and gave her the packaged leftovers he had taken from an event before hand. After seeing how thankful the woman was, it inspired him to take his idea forward.

At first he used his own money, purchasing; pads, tampons, toe and hand warmers, toothpaste and toothbrushes. He also began a Go Fund Me page called FOR (Female-Oriented Relief). 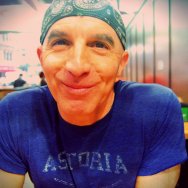 The Fund Me page has not only raised over $1,500 but has also inspired members of the community to come forward with donations and supplies such as blankets, food and other things.

The areas that Michael tends to focus on mostly are places like Midtown, Times Square and Union Square. Places that have larger quantities of homeless women on the streets in need of aid. Michael visits about 12 women regularly however around 100 women have received the bags, which is why he always carries extras, just in case.

There’s also always ups and downs with dealing with the homeless. Some are keen for the aid and even converse with Michael while others, according to him, have declined his help.

“It really varies because as you might imagine they have very strong boundaries,” he told QNS. “I’ve learned so much in that sense. There are some women that, as I inch closer, they’ll tell me straight off to get lost. There will be some women that will see me and say hi. It’s such a great feeling that I’ve done enough to earn their trust but mostly I’m giving them just a little bit of relief on this cold and windy day.”

Already an activist for social justice issues along with being a writer and personal trainer, Michael felt that the usual tactics a lot of people

were using around the nation of protesting and holding up signs, as admirable as they are, provided little tangible results.

2017 is proving to be a very productive year for Michael. According to QNS, he is thinking of making the project a nonprofit, so as to make donations tax deductible. The reasons for Michaels constant efforts towards helping women less fortunate can be summed up in one sentence from him, “I guess the two biggest influences [for starting this project] would be that as a man I’ve always felt an obligation to do what I can to give back in terms of how much privilege I have, as a man, and I recognize how women on all levels face oppression.“

According to The National Center on Family Homelessness around 50 percent of homeless women around the country say that domestic violence was the cause of their situation.

If you would like to donate money or supplies to the Female-Oriented Relief project then you can visit the here!