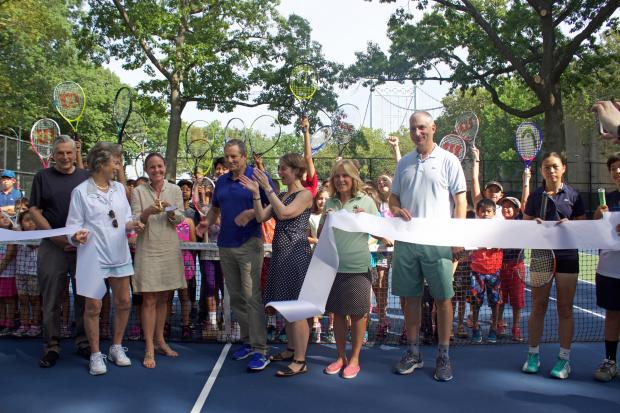 For a long time, the tennis courts at Astoria Park have been in a bit of a mess. Astorians and tennis goers alike have had to put up with the torn up surface and less than appropriate playing conditions.

However, good news is finally here as the Astoria Park brand new courts have officially reopened this Thursday. The overhaul included an entire re-paving of the court surface to a professional sports style, according to officials.

Heather Lubov, the City Parks Foundation’s executive director was at the opening, saying that “this is one of the most popular parks in the city for tennis…….The courts were cracked, there was grass growing up, the nets were shot — this is a 100 percent improvement.”

The entire refurbishment cost $750,000 which was funded by a grant from the Thompson Family Foundation, according to DNAinfo.

There was also installation of new nets, repainting, resurfacing with Deco Turf and more.

It’s not all that the tennis courts have to offer. Around 200 kids usw the courts all throughout summer for free tennis lessons given by the City Parks Foundation along with young players and even tennis great Virginia Wade (former U.S. Open and Wimbledon winner) who attended the ribbon cutting ceremony.

For those interested in the free tennis lessons, they are for all kids ages six to 16 and are on twice a week in one of 38 participating parks across the city.

To learn more about the programs registration and open times, visit the City Parks Foundation’s website.