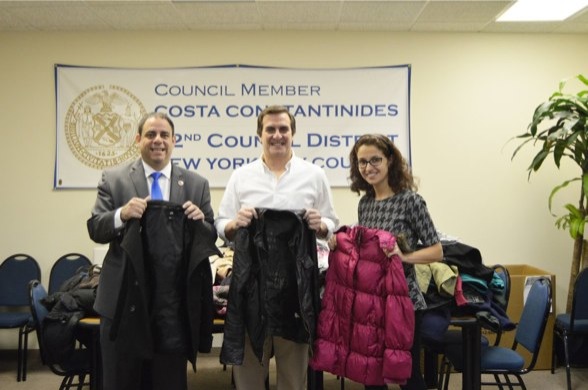 Up to 100 coats were collected this Holiday Season at the offices of Astoria leaders, including City Councilman Costa Constantinides (l.-r.), state Sen. Michael Gianaris and Assemblywoman Aravella Simotas, according to TimesLedger.

The coats were being collected in an effort by New York Cares to gather around 80,000 coats for their 27th annual drive.

City Councilman Costa Constandinides said that “families in need can use our help this holiday season, particularly as the weather changes. Warm clothing is a necessity for anyone living in the city during the winter. Many in this city lack access to a warm home or a coat to protect themselves from the cold. That’s why we coordinated this drive with New York Cares.”

The materials and transportating of the winter coats was aided by Teamsters Local 814 as well as Globe Storage. There were also a fair few toys that were donated by the community, all wrapped and distributed to children in need by Urban Upbound.

Assemblywoman Aravella Simotas (D-astoria) was also present and helping the donations. She said “a warm coat can save a life and a toy can make an otherwise bleak holiday bright.”

It certainly was the season for giving, with Constandinides also aiding the children of New York by collecting nonperishable food to give out.

With so many needy people out there these holidays, it was great to see the community banning together and helping the less fortunate. The spirit of the holidays was very much part of Astoria this year.