“Leave the Gun. Take the Cannoli.” …Or the Pizza

When he’s not serving up exceptionally crisp, chewy, bottom–charred, thin crusted slices of pizza with fresh mozzarella and drizzles of tangy tomato sauce, topped off with a twist and grind of black pepper and 18–month–aged Parmigiano Reggiano, he’s stirring up some controversy among Astoria locals.

He’s not doing it on purpose. Once a wise guy doesn’t mean always a wise guy, but Andrew Bellucci has ruffled a few feathers with his marketing campaign after turning his life around like a flip of a pizza.

It all started with a casual stroll past this newcomer pizzeria I’ve been meaning to try. The small, renovated hole in the wall with the open window, wooden slats, chalkboard menu and white chef aprons all pointed to “Go Ahead. Make My Day.” I don’t mean to make a “Sudden Impact” here by conjuring up any references to Clint Eastwood movies, but I wanted him to really make my day, and to give me a reason to go back. Will this be all the Gucci? I was pleasantly surprised. 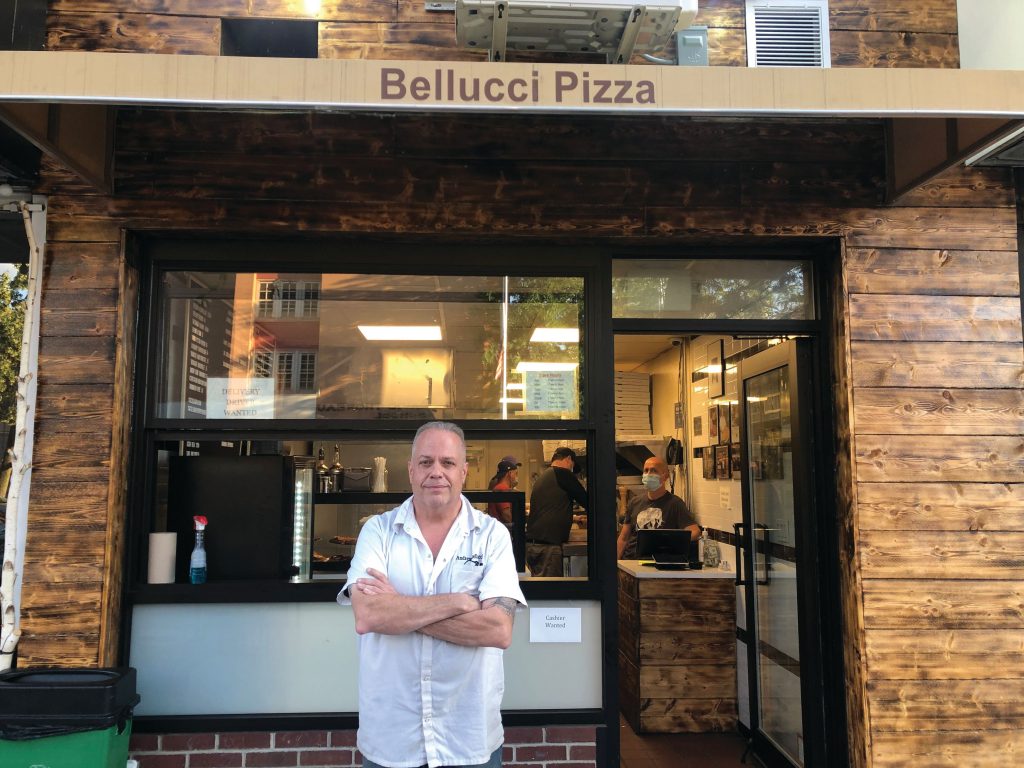 The menu boasted a simple, savory description of honest ingredients that make this one of Astoria’s finest slices. Of course, pizza preference, especially with New Yorkers who are very territorial of their pie choice, is subjective, as I would come to find out. No self-respecting New Yorker takes the topic of pizza lightly. After posting my very supportive review of Bellucci pizza in an Astoria group on Facebook, I had no idea that my own photo would become taboo. I was so excited to share the goods, that I forgot to remove the knife from the photo I posted.

That image itself triggered a chain reaction of “who the hell eats pizza with a knife and fork?” The comments kept coming with a seemingly innocuous tirade of verbal assaults on how one should eat their pizza (in this case, it would mean properly with their hands) down to who has the best pizza in Astoria. Then it got political. Someone pointed out they would never eat Bellucci’s pizza with a “hard no” because of a highly controversial image on social media posts. It was the image of a woman pointing a gun to a man’s head with the caption, “enjoy every pie as if it were your last.” The woman happened to be Mr. Bellucci’s wife, and the man was Mr. Bellucci himself.

The owner, Andrew Bellucci, is an ex–con, which might seem like a heavyweight title for a petty, white–collar crime he committed back in the 80s. I had no idea. Should I care? I wasn’t looking to out him for bad behavior. Isn’t everyone entitled to serve their time and get it right the second time? 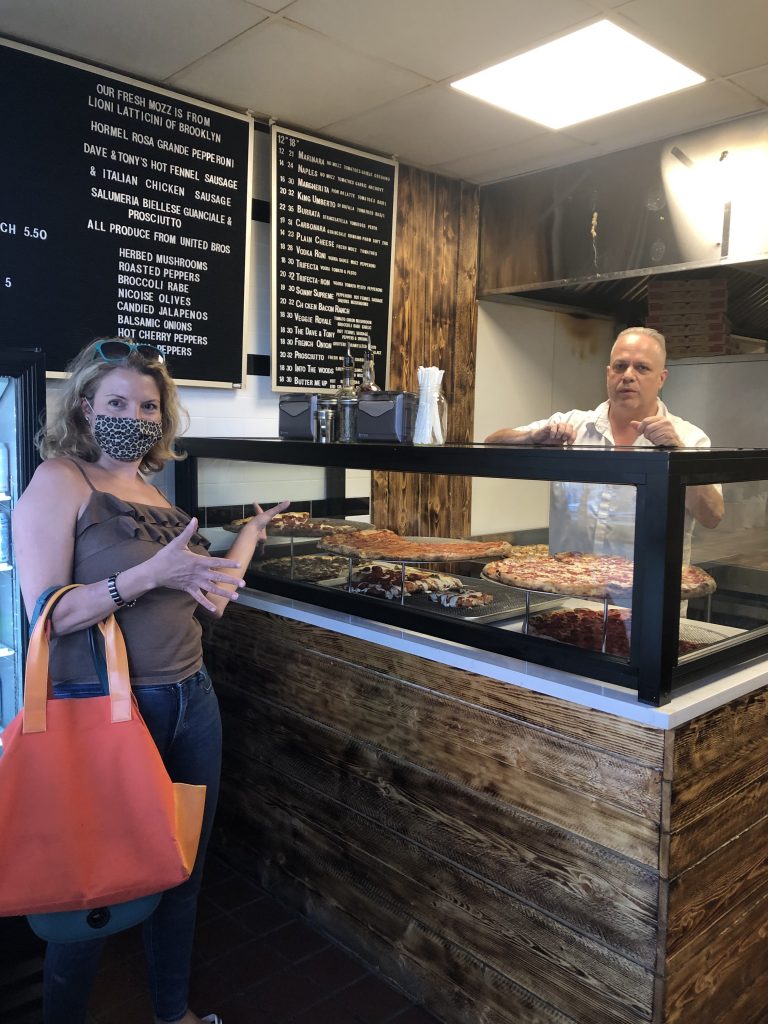 It was followed by another grievance: the infamous gun to the head ad. I didn’t know about this either, but I understood the outrage there. It may not have been the wisest marketing strategy, given our climate of gun violence. Still, I choose to support him. Everyone has a conscience and a right to support what they want, or don’t. How do we really know who and what we are supporting in any business? There’s the devil we know and the devil we don’t.

He’s honest about his past and has come clean. He isn’t hiding anything by posting news stories written about him on his shop’s wall of fame, or shame. Should we disparage a place based a silly, wise guy mobster movie type of ad that some may have found funny and others found vehemently reprehensible? Should we proceed to cancel and boycott all great mobster movies that depict gun violence, or any kind of violence? Art is art, and one might justify the projection of violence in these films as artistic license.

What do pizza and guns have in common? Nothing, unless you watched movies like Goodfellas, The Godfather, and Bronx Tale. In some of these films, someone walks into some red–checkered tablecloth joint and fires a few shots, but that’s life in the movies. The owner wanted to play upon the movie theme. Some got the humor. Some didn’t. He got yet another slap on the wrist for bad advertising. Bellucci admitted that he didn’t mean to offend anyone nor promote any violence. Let’s cut him some slack. What he thought might have been a clever PR move backfired. The ads have been taken down. The pizza is great. 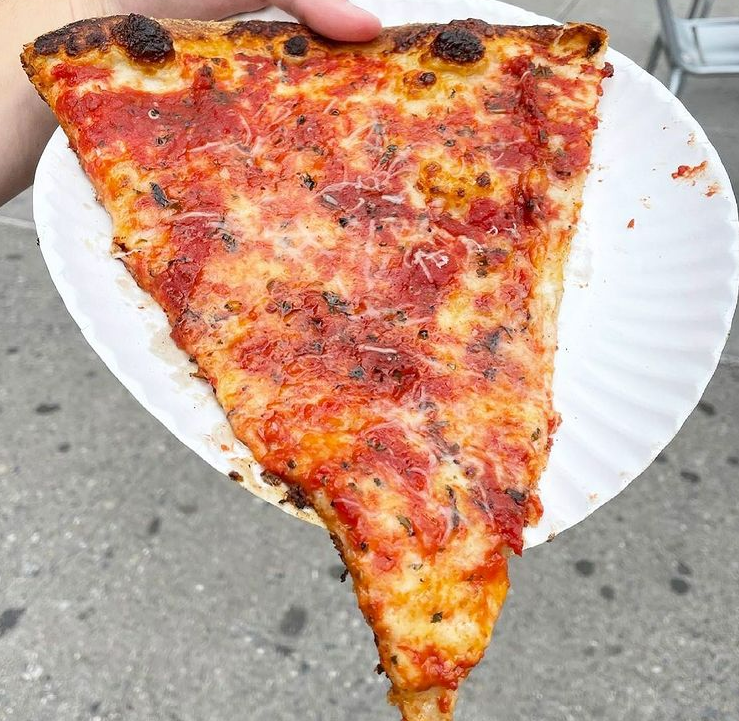 Speaking of movies, Bellucci is actually the subject of one. Untitled Pizza Movie, directed by filmmaker David Shapiro, premiered at Sundance in 2020. It documents his journey in a seven-part series. After his release from prison, Bellucci was a NYC cab driver for sixteen years, but pizza is his passion, and he wanted to continue mastering the art of pizza-making. He then traveled to various parts of the world, primarily Asia, where he opened up restaurants and continued to perfect his pizza craft. With NYC on his mind, he decided to give it another chance here. He started opening pop-up pizza shops with the goal of bringing us a Michelin–rated pizza to the shop’s permanent home, right here in Astoria.

Bellucci was very amicable, hospitable, and eager to talk about his pizza. His commitment to making his pizza into an “upper crust” meant checking his timer and reminding himself that he had six minutes to go before hitting the dough. I can’t remember if it was before or after it rises. Talk about being “under the gun” to make a great pizza! I knew under what pressure I was, in that moment, to hurry up and take a few photos. I didn’t want to be responsible for a magnificent success turning into a magnificent failure, about to fall flat on its side.

Is $3.50 unreasonable for a slice? Some thought so. Last I checked, pizza slices, unless they are from 7-11, cost a little more than $2. You get what you pay for, and, in this case, with its fine caliber of ingredients and outstanding crust, it’s worth the extra penny. Go ahead. Give it a fair shot. If it knocks you off your Guccis, you might be going back for more at Bellucci’s.