Resounding is partnering with Radial Park to present five in-person live immersive audio plays featuring live actors for five weekends, including a remount of the company’s popular Treasure Island, an adaptation of Shakespeare’s The Tempest, a new ghost thriller, Beyond The Veil, and an unauthorized parody in iambic pentameter of a classic film script, Clu-eth, and the musical Triassic Parq with the original off-Broadway cast.

The production will be performed for both an in-person audience and via audio simulcast as part of a month-long festival at the theatrical drive-in experience Radial Park. In-person audiences will be given special “silent disco”-style headphones to get the full immersive sound experience

Guests at Radial Park can enjoy the theatrical show from the safety of their own vehicles or via reserved picnic tables spaced appropriately for social distancing for those who prefer biking, walking, or taking the ferry to Halletts Point Play. 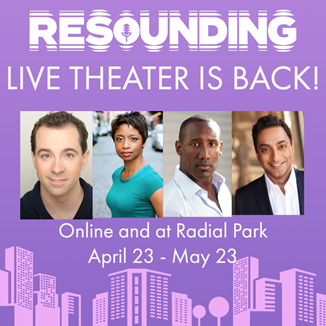 LIVESTREAM Tickets start at $10 per listener.

The play resets the story to 1606 England  as though Shakespeare had originally penned the cult classic murder-comedy based on a popular board game.

Beyond The Veil (World Premiere)

A thrilling, chilling, spine-tingling ghost play for your ears about a small town doctor, wracked with grief, who recounts the strange tale of another grieving family in his care, and their joint decision to seek the aid of a Spiritualist medium to help them “lift the veil” between the worlds of the living and the dead to bring them closure. What they find “beyond the veil” will haunt you long after the séance has ended.

Shakespeare’s beloved fantasy of magic, monsters, spirits, romance and justice will be heard in a bold new way, with the enchanted soundscape of Prospero’s spells and the lush music of the mystical island itself accompanying some of the greatest language ever written. A transporting experience for you and your whole family.

Yo-ho-ho and a bottle of rum! Avast, ye lubbers! There be pirates and treasure ahead… Prepare to go on the greatest pirate adventure of all time and set sail for Treasure Island! Come aboard the fabled sailing ship Hispaniola with young Jim Hawkins as he and the crew seek the lost treasure of Captain Flint with only a scrawled map to guide them. But beware, for there’s mutiny aboard as well, with the cunning and roguish Long John Silver ready to kill all who stand between him and the buried booty awaiting them on the isle. Immerse yourself with the crashing roar of the high seas, the roar of cannon fire, swashbuckling cutlasses and feats of derring-do as only Resounding can deliver.

As important a work as ever was penned for the musical stage, this work of Destiny, this musical juggernaut, returns to NYC for the first time since its off-Broadway premiere in 2012. Experience the red hot profundity of hearing the tale of a certain Theme Park through the eyes of its resurrected dinosaurs as they discover the truth about faith, science, innocence, sex, and gender identity. And it’s still a musical! (Adult themes and language: NSFW or Little Dinos)