The Unexpected Mascot of Composting

After the city’s Covid-19 budget cuts deemed composting non-essential, Rocky the Pug has become the adorable face of composting in Astoria. Realizing that composting drop-off sites were closed, partners Caren Tedesco and Lou E. Reyes, began collecting food scraps and other composting material from neighbors to bring to a local community garden. Though it wasn’t until they posted about their progress on Rocky’s Instagram page that the makeshift program blew up.

“We went from collecting about 60 pounds from neighbors to more than 500 pounds of compost material,” says Reyes.

What started as a quick fix to the city’s drop-off sites suspension, turned into a peer-to-peer (or peer-to-pug) service around Astoria. Within a few weeks, they had established a new composting routine for neighbors, and so decided to remain committed to the service and the people. 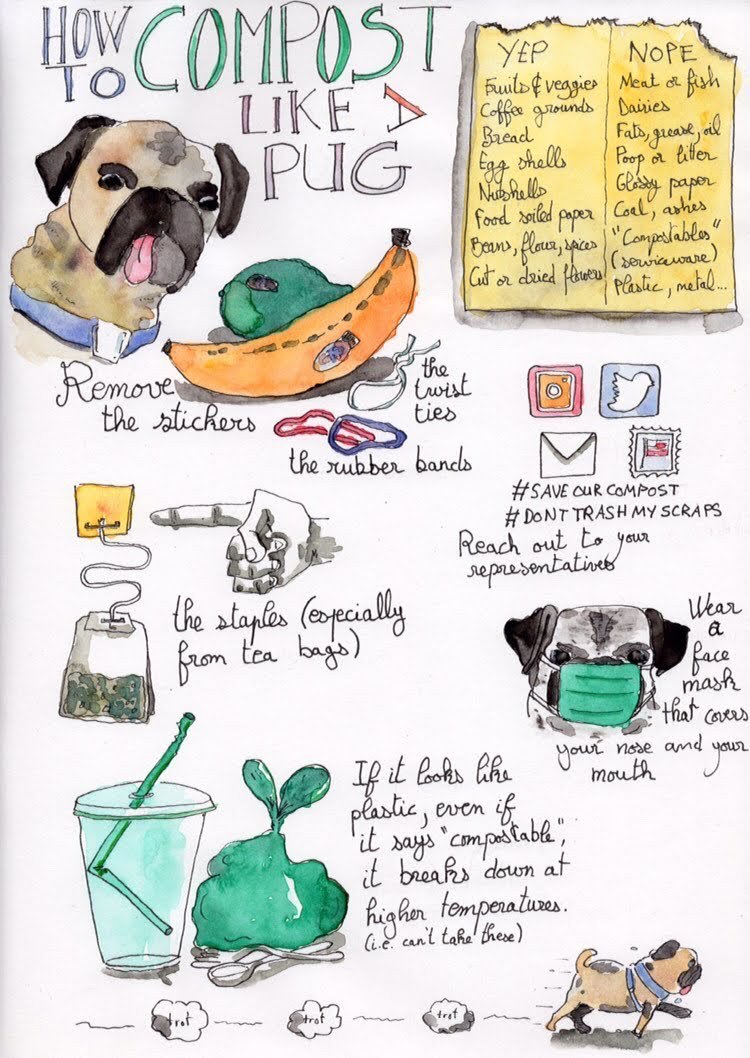 Long-time composter Tedesco recalls, “Everyone who dropped off their food scraps with us felt let down by the city… So we weren’t doing something completely new; we were just filling the gap that Covid and the budget cut left, helping to cover the demand that was already there.”

Rocky’s page has generated a faithful following and an active community program for a much-needed service. Now with five different drop-off locations open Fridays and Saturdays, accumulating more than 400 visitors, and hundreds of pounds of compost each week, they have partnered with local farms, including Randall’s Island Urban Farm, and environmental non-profit, Big Reuse.

Individuals, couples, and families with children have begun taking outings to visit Rocky and even brought their own pets to drop-off sites, turning the routine chore into fun community events. Tedesco credits this growing success to the Astorian’s knowledge and support that composting is essential and an important, “part of our toolkit to fight climate change and used in the maintenance of local parks, gardens, and farms.”

Caren, Lou, and Rocky plan to make Astoria a model for composting. To keep sustainably expanding and improving so that Astoria Pug’s methods will spread to other neighborhoods around Queens, Brooklyn, and beyond. The first step in their long-term plan is creating 24/7 drop-off sights for everyone’s equal accessibility to sustainable composting services.

“I feel excited for having the community support that we have, and the incredible, passionate, and ingenious people we met along the way and helped us build Astoria Pug.”