It seems like Astoria is making every top list when it comes to nightlife and cuisine. Petey’s Burgers has just made Thrillist’s “31 Best Burger Joints In America” and we couldn’t agree more.

The Queens burger joint serves up a West Coast style menu and was the only NYC eatery to make Thrillist’s cut.

Petey’s has locations in Astoria and Long Island City and made it up on the list with burger joints across the country. The list was handpicked by Thrillist national burger critic, Kevin Alexander. 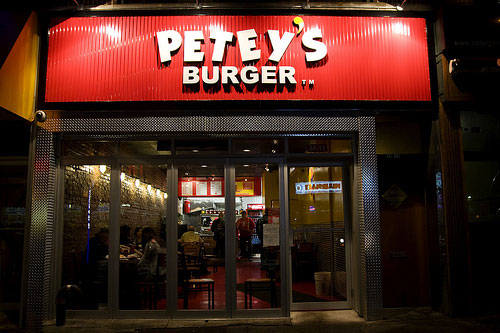 With nothing but praise, Petey’s West Coast style burgers were said to be “even better” than the actual famedWest Coast In-N-Out burger chain they were up against, according to Wil Fulton, a senior writer for Thrillist.

“Yeah, I said it…Oh, and their fries are WAY better, too,” Fulton writes in his review, along with calling Petey’s a “low-key, classic burger joint that will remind all Californians of home” continuing on with praise for the “thin, juicy, double-stacked patties, Russian dressing, thick slices of American cheese (and) sharp onions” that give its Cali-style burgers their delicious punch.

Have You Had A Burger At Petey’s?

But this isn’t the first time we’ve seen Petey’s on a list. The joint was voted No. 1 in a March Madness style bracket competition in 2015 that Thrillist ran. The website also featured Petey’s triple cheese burger this March on “New York City’s Best Burgers: The Definitive Guide.”

Not only are the burgers better at Petey’s, but the price is just right. You can grab a feed anywhere from $4 to $10 bucks, with combos that include awesome fries and a drink.