It looks like the resistance is here. Coordinated and performed by residents of Astoria, the monthly initiative is called “Not My President: A Monthly Show of Resistance”.

Its hopes are to do more than just rally and protest. The performers are set to do a show each month, with half the door proceeds from the event getting donated to a worthwhile organization. Using one of the most powerful tools, music, RoseAnn Fino has taken to the stage to get people involved in standing up for what they believe in.

In a time when some might feel alienated or unheard, the show gives people a chance to start something small and eventually see it flourish into its own movement.

The next show is on tonight! This time, the group will donate half of the door proceeds to CAIR-New York. The Council on American Islamic Relations of New York is a chapter in America’s largest Muslim civil rights organizations. The mission behind CAIR-NY is to encourage a dialogue between people of different backgrounds and religions. CAIR-NY hopes to create a greater understanding of Islam, while protecting civil liberties and empowering American Muslims while promoting social justice. 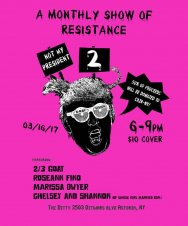 Image Via The Resistance

Here’s The Line Up:

RoseAnn Fino And The Lovely Misfits