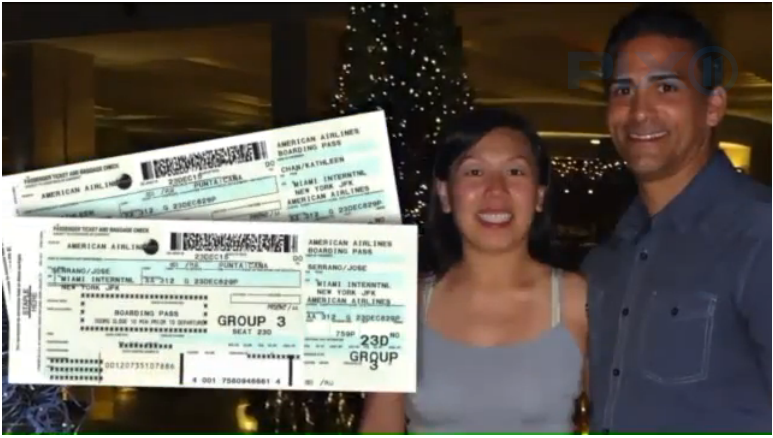 A couple from Astoria was detained two days before Christmas flying back to JFK Airport under suspicion that the man was going to sell the woman he was with.

Kathleen Chan and Jay Serrano caught a flight from Miami after relaxing on holiday in Dominican Republic and headed back to their home in Astoria when the captain of the airplane they were on gave orders for everybody to remain in their seats with seatbelts on.

After a few moments according to Pix11, the cabin doors opened and 3 Port Authority police officers began walking down the aisles until they got to the couples seats.

One of the officers then asked Kathleen if she had any ID. After she had produced an American drivers license, the officer escorted her outside.

Pix reported that Kathleen then asked the officer what was the reason for all this with Chan recalling, “He told me the flight crew had alerted the police that it was a possible case of sex trafficking.  They thought I had not spoken any English, and that I was taking directions from Jay during the flight.”

When Serrano was allowed to leave the plane and join his partner, they were told by the authorities that the reasons for the suspicion was that the cabin crew thought Chan (raised in America)  had followed Serrano to the bathroom and waited outside.

Ross Feinstein, Senior Manager for Corporate Communications for American Airlines told Pix11 that the issue of human trafficking is one taken very seriously in any and all airlines.

He also stated that any suspicious actions by passengers are reported immediately to the authorities so as to be safer rather than sorry in the long run.

One of the actions being that Chan was seen following and taking care of Serrano (who later stated he was ill on the flight). Sex traffickers usually do not allow free movement of their victims.

The couple who are celebrating nine years together found the experience embarrassing to say the least, especially Serrano, who had to put up with the looks from fellow passengers when he walked out of the plane.

Although the actions of the Airline are understandable as an estimated 800,000 to a million minors and women are sexually trafficked every year, Chan stated that she and Serrano 'don't fit the profile' and that 'it wasn't fair'.