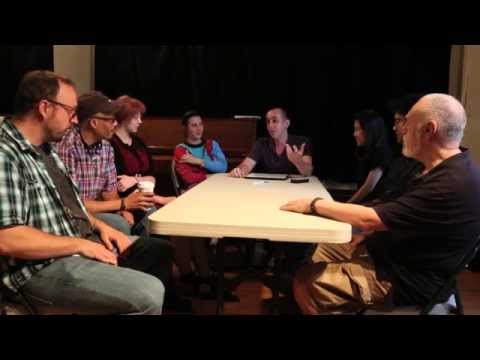 Talk about niche jobs: Jordan Yanco is the man behind the accents.

Jordan is an Astoria based accent coach, and whether it’s for a play, movie, or just for fun – he can teach you how to talk like you’re from anywhere in the world.

We had a chance to chat with Jordan – and in hindsight, probably should have recorded this interview, because it was filled with loads of accents!

“I first got into being an accent coach because of a combination of two things: Having a good ear, and always doing voice and impressions,” Jordan tells us,”I also studied linguistics, so all of that really helped me.”

What Jordan does, essentially, is teach people how to put on a convincing accent – one that isn’t overly theatric, but is subtle and believable. While we talk, he picks up my New York accent – the dead giveaway is that New Yorks apparently say “tzalk,” with a sharp “s” sounding t, instead of talk with a hard t.” Confused? Say it out loud. How do you pronounce talk?

“My favorite accent is probably a British accent,” Jordan says.

“While it seems really fun – which it is! – it’s still a job. I’m constantly studying languages, voices and linguistic, so I can teach them perfectly.”

And teach he does – to lots of diverse people, especially in Astoria.

“One of my favorite experiences as teaching a school of little children accents for the production of Guys and Dolls.

It’s not always about putting on an accent – sometimes it’s about getting rid of it. Jordan also helps people that want to get rid of their accents, such as immigrants that haven’t quite made the transition in pronunciation.

If you want to learn how to put on your best accent – you’re in luck. Jordan does workshops every two weeks, and his latest one is tomorrow at Q.E.D. There, he spends two hours teaching the four most popular accents: British (received pronunciation, which means the accent that you hear from people like newscasters), Cockney, New York, and Southern Drawl. It’s two hours of chatting and fun, and getting to know the ins and outs of sounding like someone else!

Check out one of his workshops below:

If you want to learn more about Jordan, check out his website!