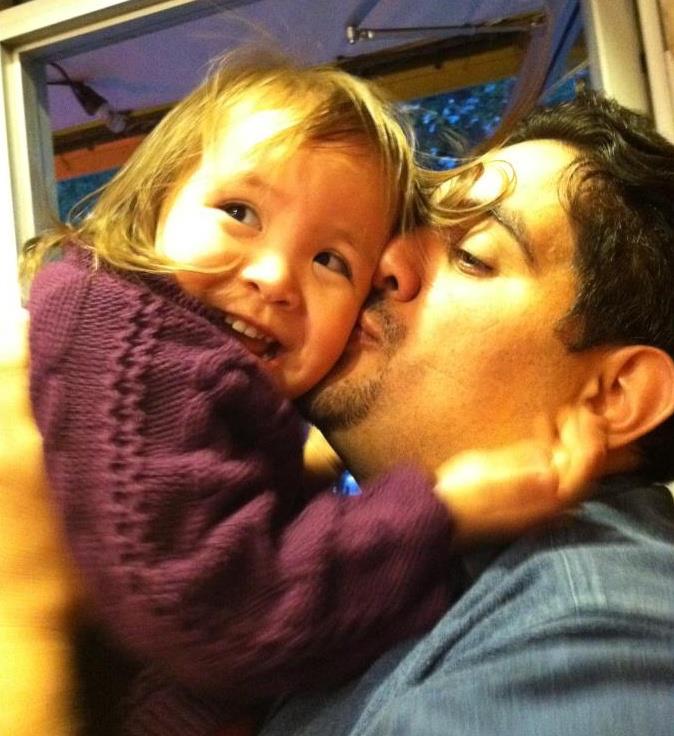 This week’s Human of the Week is Pedro Gonzalez – a man that is literally doing it all in Astoria.

You might know him from Waltz-Astoria – he’s the one hosting with his booming voice, and walking around with Phillip the tip jar post-show, or from the Furniture Market on Astoria Boulevard, where he can help you pick out a new sofa to match your teal and orange walls, or find you a civil war era sword.

How did you get involved with Waltz?

My wife Song originally owned it with an earlier partner, and eventually they broke up. When we got together, I took it over full time.

You and Song are the faces of Waltz-Astoria – do you feel like it’s something especially important you?

Absolutely. Everyone’s heard this story before, but I proposed to my wife on that stage. My daughter took her first steps on that stage. Waltz-Astoria is really like a home to us, and all the performers and musicians are like our family.

Before Waltz, did you have a background in the arts?

Not at all! I went to culinary school. The thing is – I knew Astoria. I’ve lived my entire life in this neighborhood. And I knew all about business – so Song and I fit together perfectly  with Waltz – I ran the business aspect, and she did the rest.

So you went to culinary school – where did you learn about business?

You’ve seen hundreds of performers on the stage at Waltz-Astoria, can you tell when someone’s going to “make it?”

Yes! Absolutely. I always tell my muscians this: A LOT of people have talent. But it’s more than talent – it’s drive. I always go back to this story: Bon Jovi, before he was Bon Jovi was waiting tables, and he was so broke that he used to eat the leftovers that customers left on his plate. That’s what it’s about – maybe not in exactly that way – but you have to really want it more than anything ­– more than partying, more than girls, more than drugs. There’s truth to the term “starving artist.”

We’ve also had a few people that have made it big. We had Blessing Offer, who’s played on the Waltz stage, and went on to The Voice. Another artists, Amanda Lee, played her first show at Waltz, and now she’s in a band, Mister Wives, that’s really going places.

Do you see that a lot of the people that perform at Waltz are starving artists?

New York City is so expensive, that a lot of our artists are just getting by on rent. That’s a huge reason that we’ve tried to keep our prices at Waltz-Astoria low and consistent for performers. We’re not an exclusive club that you have to pay a huge sum to be part of. We even have memberships now that overtime end up costing the performers less. It’s more about them getting a stage.

Have you ever turned away an artist from performing?

You know, I’ve hurt a lot of feelings in the past. People have asked me for shows, and I’ve said no. Part of that is because I’m blunt and honest and have a big mouth (which gets me into trouble a lot), but part of it is that we put on really quality shows. In the 7 years we’ve been around, we’ve had maybe five bad shows. And it’s not that I’ll never give them a show – but I want them to improve, and have something to work towards.

You also like to collect things – what is it that you collect?

I really love old books, and old weapons. Like , really old. I have an original book by Shakespeare. (sidenote: I squealed at that.) I have a civil war era sword, as well.

Between Waltz-Astoria, the furniture market, and having a wife and toddler, how do you manage your time?

Oh, that’s easy. I yell at people a lot! But in all seriousness, it’s not a one person job. Everyone pitches in, everyone helps, and somehow we get it all done. My wife is extremely helpful, as are my parents. They’ll watch my daughter Annabelle when Song and I are at Waltz, and we’ll switch off, too.

Pedro and his daughter, Annabelle

You grew up in Astoria, have seen it really change since the 70’s and 80’s  – would you ever consider leaving?

I did leave for a while – I lived rent free in Manhattan, and I would never go back. The thing is, Astoria has changed for the good and bad. It’s both. But the good outweighs the bad. I’ve met so many great people and made so many great friends because of what I do – I hit it off with everyone. Honestly, Astoria is my home, and it’s where I’m raising my daughter, and where I plan to stay.