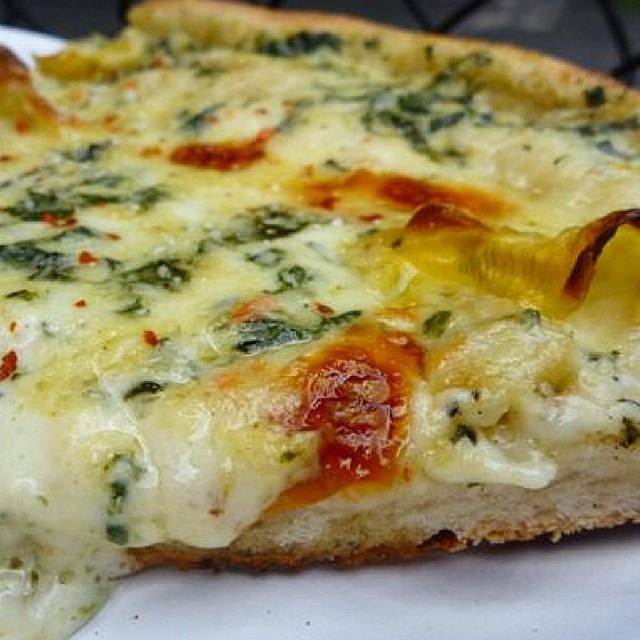 YA’LL WE LOVE PIZZA. If you’ve been reading for a while – you might know that already. So just imagine our excitement when we heard the rumors that Artichoke Basille’s Pizza might be coming to Astoria.

Now – at this point, it’s just a rumor. But we’re hoping if we think enough happy thoughts, it’ll actually happen.

The proposed location is the former space that was occupied by Teddy’s Florist. If you remember, the owners of Teddy’s got booted because of ridiculously high rent prices – so we’re guessing it’s going to be a hard spot to buy. The former grocery/deli next door has also been dismantled – and the two spaces are being combined to create one, much larger, space. Artichoke’s is a well-known, high income pizza shop – so we’re guessing they can definitely afford it.

If you’ve never had Artichoke Basille’s Pizza..oh my. It sounds gross at first. Whose first thought about pizza is “WE SHOULD PUT ARTICHOKE ON THIS.” But it totally works. Artichoke pizza is extremely thick and creamy – you kind of have to toss out all your ideas about pizza, and have them re-made. The slices are huge, and even one is enough to fill an empty stomach. Two and you’ll be groaning on your couch.

They’ve also got classic slices, Sicilians, and another unique one – the crab pizza. All are tasty – but we’ve found the crab can be a little…hard to swallow sometimes. You really have to be a crab lover.

If Artichoke Basille Pizza makes an appearance in Astoria – we’ll be more than happy! You can never have enough pizza – especially unique pizza layered with artichoke!