The Top 5 Movies Filmed in Astoria 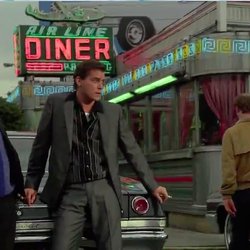 New York has been the home of thousands of films, but don’t we all get a little prideful when we catch a glimpse of Astoria in a movie? We’re counting down our five faves that were filmed partially or fully right here in Astoria!

Okay, so it’s technically about the Bronx…but it was filmed right here in Astoria. Set in the 1960’s the movie stars Robert DeNiro and tells the tale of DeNiro’s son growing up under the eye of a local gangster (Chazz Palminteri), who takes a liking to him. The movie is filled with tragedy, but is an amazing depiction of the lives New Yorkers used to live – lives that faced situations like racism, and gang violence.

Another crime-filled gangster movie, Goodfellas is set in another borough – Brooklyn. Apparently Astoria is a great stand in for other boroughs. Goodfellas tells the story of middle-class Italian Americans, and their mafia lives. Based on a true story, the movie revolves around Henry Hill – a local boy turned gangster, his best friend Tommy DeVito, an actual gangster, and Jimmy Conway, who brings the two of them together. The film shows Henry’s ascent from small time wannabe gangster, to big time thief, and middle aged cocaine addict and dealer. The film is amazing in it’s exploration of the mafia – you get to see the real, “blue collar,” side of the mob.

Okay, pause. I’m seeing a pattern. What’s with all the crime films? Weird. Moving on. Serpico stars Al Pacino – so you know it’s good. Set in the 60’s and 70’s, Serpico is about the life of Frank Serpico, played by Pacino, who is an idealistic, inexperienced new cop. He moves up and becomes an undercover cop, busting the city’s druggies and drug dealers. He does his best to uphold the law…and quickly realizes his colleagues don’t. Frank finds out corruption is rampant in the NYPD, especially in plain clothes officers like himself. From accepting free meals, to money for bribes, his brothers in the law are nearly all dirty cops – and Frank is faced with a decision to make: does he expose the corruption, or continue on and hope he never gives in?

The Taking of Pelham 123 stars Denzel  Washington and John Travolta, and is about the hijacking of a New York City train (because come on, if you’re going to make a movie about subway trains…it’s got to be set in New York.) Four men, led by Ryder (Travolta), hijack a train and demand $10 million…or else they’ll start shooting hostages. On the other end of the phone is Garber (Washington), who’s been temporarily demoted under suspicion of bribery charges. The movie is tense and action-filled, and Washington and Travolta’s chemistry is what keeps it moving forward.

A Guide to Recognizing Your Saints, based on the memoir of the same name, is not only set in Astoria, but it’s about Astoria. After living in LA for 15 years, Dito’s mother calls him to let him know of his father’s diminishing health, so Dito packs up and heads back to his hometown of Astoria. Through flashbacks, Dito recounts his childhood growing up in Astoria, and the film switches back and forth between present day Astoria, and Astoria in 1986. The film deals with Dito’s friends, his girlfriend, and all the situations they faced growing up in Astoria – situations that range from inane to insane. It’s an amazing look at what Astoria used to be like, but it’s also fun to watch the film and think “Hm, nope. They got that wrong,” from the point of view of someone that actually grew up here.

Can you think of any other movies that were shot in Astoria? Have you watched any of these before and catch a scene set in Astoria? Drop us a comment below!