An Arts District…In Our Backyard?

You might have heard that Astoria is Queen’s very first Arts District…which is kind of a big deal. Seriously, do you realize big Queens is!? The announcement was made on  March 28 by New York City Council Majority Leader Jimmy Van Bramer. 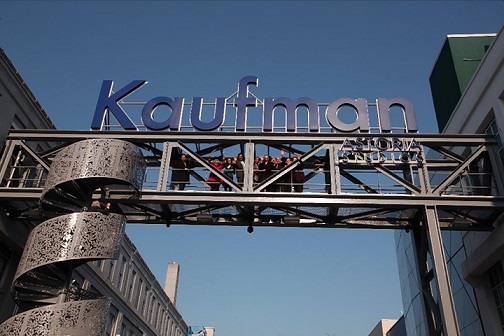 The district was established in partnership with Kaufman Astoria Studios, the Museum of the Moving Image, and the Queens Council on the Arts. You might know Kaufman Studios as the home of shows like Nurse Jackie, Sesame Street…and our latest obsession– Orange is  the New Black. They’ve filmed movies there like The Bourne Ultimatum and The Secret Life of Walter Mitty.

The district includes the Museum of the Moving Image, the only museum in the City dedicated to the art and history of film, television and digital media; The Astor Room, a restaurant that is housed in the former Paramount commissary with much of the original interior still intact; Studio Square NYC, an enormous 30,000-square-foot outdoor beer garden that is also used for film and TV shoots; the Queens Council on the Arts, a non-profit organization that supports and develops artists and arts organizations throughout Queens; the Frank Sinatra School of the Arts, a public school founded by Tony Bennett; UA Kaufman Astoria Cinemas, a 14-theater multiplex; the Theater Development Fund’s Costume Collection, a repository of costumes available for use by theater, film and television productions; and the Astoria Performing Arts Center.

There’s lots of events coming up in the Arts District! The Museum of the Moving Image is presenting a special exhibit Lights, Cameras, Astoria! that will depict the history of Astoria’s film production. Then in May, Kaufman Astoria Studios is presenting “Astoria Flea and Food” in partnership with LIC Flea and Food. There’s going to be food vendors, antiques, collectibles, arts and crafts, fashion and more. It’s going to be super cool, make sure you stop by these events!