This past Saturday, we had the honor of attending Life Health and Fitness’s annual fundraising event for St. Jude’s Children’s Hospital. It was a great time, with awesome people, a super cool guest and lots of sweating. Yum. 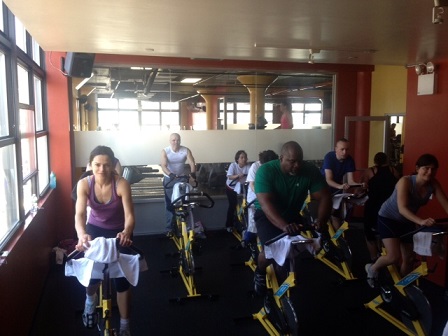 If you read our last story on Life Health and Fitness, you know how much they love charity organizations, and doing fundraisers. It’s no surprise that when member turned trainer Lisa Bako mentioned fundraising for St. Jude’s, owner Sophocles Tsouros jumped at the idea. Lisa, who has personally had her life touched by a child with cancer, knows the huge affect it can have on a family. She says, “to be able to help even one person makes it all worth it.”

They’ve been at it since 2011, and since then, have raised over $20,000. This year, for just a $25 donation, members got to choose from classes such as Zumba and Cycling, and get the satisfaction of truly making a difference. Everyone at the gym, from toddlers to teenagers, was in great spirits, and ready to work out and raise money.

This year’s special guest was New York Giants Quarterback Ryan Nassib, who we got a chance to sit down and talk to. Ryan was super humble, and really passionate about taking part in the fundraiser. It was his first time taking part in a fundraiser for St. Jude’s Childern’s Research Hospital, and he tells us it’s a cause he can definitely get behind.

We asked Ryan what it’s like playing football for one of of the greatest cities in the world, and he told us “It’s been a fun, wild ride.”Being in New York isn’t like being in any other city– the coaches, the people, everyone is different any great.”

As for advice for the younger generation of footballers? Ryan Nassib had one thing to say: BALANCE. Balance school and football. When you study hard in school, you play hard on the field. They directly correlate with each other. If you’re doing poorly in school, your game is going to suffer.

The hardest part, he tells us, is that everyone’s good. Everyone you’re playing against is big and strong, so you can never stop learning, never stop working hard.

Sophocles of Life Health and Fitness tells us he’s so thankful for Ryan being part of their great cause. He’s looking forward to the next big fundraiser, and raising even more donations than this year. You can bet we’re right behind them.

Now think about this: Just one day of chemo for a patient costs more than $5,000. Life Health and Fitness is still collecting donations– help them make a difference!