A Stroll Around Old Astoria Village

In walking through the streets of Astoria, one experiences far more than just a neighborhood; you walk through different cultures from around the globe and sometimes, you journey through time itself.

If you ever get curious as to what 1830s Queens looked like, travel no further than historic Old Astoria Village. Not only will you be in awe of these perfectly preserved estates, some nearly 200-years-old, but you’ll also be standing in the birthplace of modern-day Astoria itself. Located along 26th and 27th Avenues between 12th Street and 14th Place, numerous mansions still stand featuring gorgeous architecture which predate the Civil War by more than three decades. Some of the most impressive are the homes of Dr. Chamberlain Taylor and Dr. H. Baylies; each house bears charming cornices and facades which can rival the fictional “Tara” from Gone with The Wind.

In the early 1600s, when the first settlers arrived in the area, the land was scarcely populated and its thick forests and swampy wetlands were used as hunting grounds by the Algonquin tribe who called the land “Matinecock” or “Place of Rolling Hills.” The land between present-day Long Island City to Corona was deemed “Wandownock” or “fine land between the two long streams,” referring to the East River and Flushing Bay.

In the 1830s, wealthy business owners built their elegant and tastefully designed homes on the high ground just east of Astoria Park. In those days, the estates were widely separated and never exceeded three stories in height.

Affluent residents of Manhattan and Brooklyn, eager to escape the large crowds, pollution and disease, turned to the rural open spaces of Queens. On October 20, 1852, The New York Times wrote, “There are charming residences and delightful lawns at Ravenswood and Astoria. It is lamentable, that with such fine weather and pleasant country promenades at hand, our fair friends, especially of Brooklyn and Williamsburg, do not avail themselves of their privileges.”

What we call Old Astoria Village today was originally known as Newtown and it remained a farming community until 1835. Enter: Stephen Alling Halsey (1798-1875), a wealthy fur trader born in Manhattan and, as destiny would have it, the “father” of Astoria. Halsey was intrigued by the area after passing several times along the East River by boat. Almost immediately, he began to transform the village into a small yet bustling town and commissioned the building of new roads like Astoria Boulevard and even housing. He also brought ferry service to Hallets Point at the foot of Astoria Boulevard near today’s Astoria Park. This is what really put the town on the map and allowed the area’s population to boom almost overnight. What Astorians refer to as our local “Flatiron Building” at the corner of Astoria Blvd. and Newtown Ave. was originally Moritz Albert’s Saloon, which greeted travelers from Flushing heading west toward the water to catch the ferry to Manhattan. The former Astoria Square, bounded by the present-day intersections of 21st St. and Astoria Blvd., 27th Ave. and Newtown Ave., grew into a busy crossroads and served as the official entrance to the village. Halsey’s ferry service would last until the building of the RFK-Triborough Bridge in 1936.
In 1839, Halsey wanted to rename the area so that it could officially be established by the government. 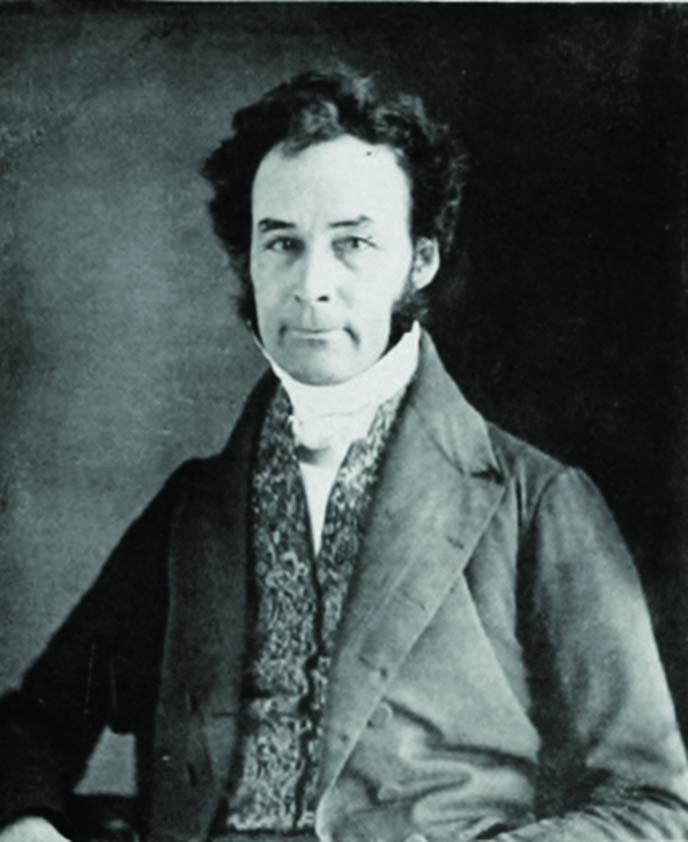 The “father” of Astoria, Stephen Alling Halsey, photographed here in 1844 at 46-years-old

The name Halseyville would’ve been an obvious choice, but the Father of Astoria decided to take a less hubristic approach. According to Vincent Seyfried’s book, 300 Years of Long Island City: 1630-1930, Halsey thought the name Hallett’s Cove was “too vague and more suggestive of a body of water than a land area.” Since Halsey was in the fur trade, he had connections to the biggest fur trader of all time, Mr. John Jacob Astor, whom he asked for financial help. Astor, who would go on to become America’s first multi-millionaire, was asked to donate $2,000 towards the construction of a new Episcopal female seminary and in exchange, Halsey would name the village in his honor. He only offered $500. Nevertheless, the money was accepted and Halsey had the village named “Astoria,” which gave it an air of distinction. In reality, Astor never set foot in the town which bares his family name. And so, on April 12, 1839, the Act to Incorporate the Village of Astoria passed in the New York State Legislature and our beloved town was born.