An Astoria Resident Uses His BBQ Powers for Good

On the occasional weekend afternoon, you may have smelled the delicious aroma of smoked meats around 31st Avenue. If you’ve followed the scent, you’ve probably met Eli, also known as “Astoria’s BBQ Guy.”

However, in the past year, Eli has become far more than just a talented chef; one could even go so far as to call him a local philanthropist. He raised over$50,000 for organizations such as the Astoria Food Pantry, the Astoria Mutual Aid Network and the American Civil Liberties Union by using his skill set to host increasingly popular BBQ pop-ups throughout the neighborhood, providing locals with no-frills, delicious food in exchange for charitable donations. “I put out a menu, people come to the location to pick up their barbecue and they make a donation,” Eli said. “Afterwards, I take that pool of money, make the donation and save a screenshot of the donation receipt to the highlights in my Instagram account so people know it’s verified.” 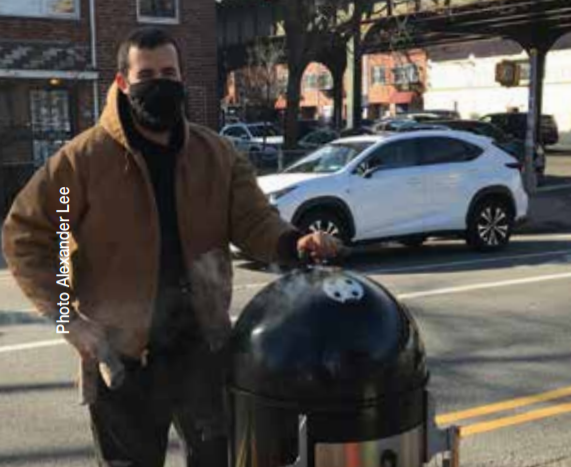 Instagram has been the driving force behind the rapidly growing popularity of Eli’s selfless mission. Early customers tagged his account, @tikkunbakery, in their stories and posts, which led to more and more pop-up collaborations with local businesses such as Heart of Gold and Comfortland. “When I approach a business, I try to make it clear what the objective is,” Eli said, “and the ones I’ve approached thus far have been very receptive to that.”

Indeed, a full-fledged community has begun to form around this mouth-watering BBQ. On weekend mornings, Eli often drags his smoker outside and kicks back in a folding chair while he practices cooking meats, inviting passersby to stop for a sample or a chat. At night, he also puts up a projector screen and hosts movie screenings: “People’s ticket to the movie was canned food donations or a donation to Astoria Food Pantry.”

The success of Eli’s barbecue initiative has given him a platform to share his ideals proudly and effectively. He’s made sure to partner overwhelmingly with bakers who are women and/or women of color and provides free meals to visitors of Astoria Food Pantry. “And it wasn’t, like, here’s some slop on a plate,” Eli said. “We smoked some chicken, we smoked some ribs.”

At the end of the day, Eli’s main goal is to help people lift each other up and build community during this difficult time. He’s not running a business; he doesn’t make any profits, and his labor is unpaid. He’s simply a guy who’s found a way to leverage his passions to help others—all while making some truly delicious food. “To me, barbecue is about community,” Eli said.“100 percent.”