A mother was enjoying a morning with her child at Athens Square Park earlier on Tuesday, July 17th when she spotted a man looking through the Jungle Gym at them, appearing to perform sexual lewd acts on himself.

The woman, who had posted a picture of the man on a popular Astoria Facebook group with a recap of what had happened, was alone with her 20 month year old in the toddler area of the park, while there was people in the other areas. 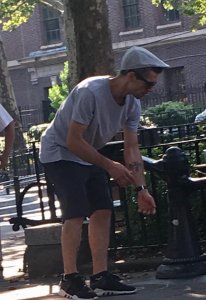 Upon seeing him, the man quickly “finished off”, then went over to the water fountain where he washed his legs and left. That was when the mother quickly took a photo of the man.

The woman called the police straight away, she left her name and number however after an hour and a half they failed to show up, after which the man had already left.

The man can be seen wearing a grey t-shirt, dark shorts, black and white sneakers and a grey hat with black sunglasses. In the image the mother took, a tattoo is seen on his left forearm.