Poke Wave Is Coming To Broadway!

Say what you want about Astoria, we’ve got cuisine, and we got diversity.

Poke Wave is the newest member of the Broadway family. The Hawaiian inspired restaurant will be opening up their doors end of May, and we caught up with one of the men behind the surfboards, Chris Tsang.

The restaurant first opened doors as a small takeaway in Flushing. Serving customized salad bowls, with fresh ingredients, quickly fueled its popularity and not long afterwards, Chris, brother Jonathan and lifelong friend/pretty much brother Kevin Lau decided to expand the take away into a full fledged restaurant.

Poke is a Hawaiian word for a raw fish salad. But the three partners decided to take that concept to another level. Having visited Hawaii a few times for ‘research’, they eventually put together Poke Wave. 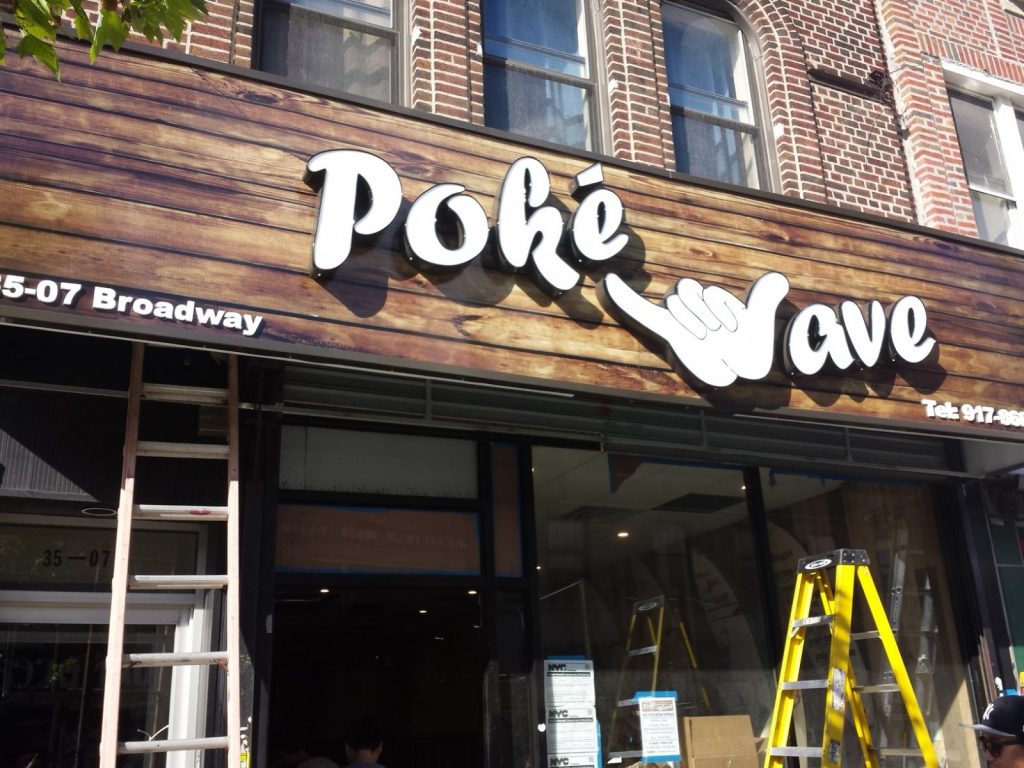 When deciding on where to go, Chris says it was easy to choose.

Astoria has long been seen as a treasure trove of cuisines, and Broadway was a perfect spot to try something new. So when Chris and the gang spotted an empty shopfront, he jumped. The openness of Astorians was always a plus. Sharing and community values is at the heart of what Chris, Jonathan and Kevin believe in.

Weeks from opening and you can see the place coming together. The theme, as you might have guessed, is Hawaiian. With surfboards hanging off the wall, menus included, the vibe is strong. A mix of reclaimed wood of all kinds and colors runs down the walls.

Wooden drums will be used as seats throughout the place. The drums will also be empty and you’ll be able to pop the top and put all your belongings inside, freeing up the table for more food!

There will also be a communal table in the back named “A Knights Table”. People can sit together, share some snacks and make new friends, something that Chris and his brothers finds most appealing about the restaurant industry.

For them, it’s all about the community. Getting together with friends, getting to know strangers and just sharing in an easy and authentic environment.

So what’s on the menu?

Fresh ingredients and healthy eating. You can either choose or customize a Mini Bowl ($7.95) or a Hungry Bowl ($10.95). Some of the house favorites are the Wasabi Mix, with salmon, wave sauce, onion, cucumber, edamame, cilantro, masago and Nori strips.

Poke Wave is currently working on bringing in some Hawaiian specialty beers and wines, however for now it’s BYOB. They also serve popular fruit juices Hawaiian Sun in multiple flavors.

With seating up to 45 people, Poke Wave has plenty of room and is ready to take the New York summer on.

Keep your eyes peeled for this place and our food review once the doors are officially open!