The much anticipated Halletts Point megaproject, being developed by Durst Organization, is finally set to start just as the developers signed a new 26 year lease for a grocery store to move into its first building. 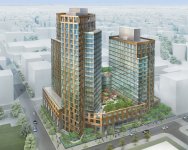 Brooklyn Harvest Market signed the lease, which comes with 24,036 square feet on the ground and the mezzanine levels of Building 1, according to Commercial Observer. The popular Brooklyn grocer has two locations in the busy hipster neighborhood of Williamsburg. One on 25 North 5th Streeet and the other on 205 Union Avenue. The new Halletts Point outpost is set to be the first in Queens.

What do you think of the Halletts Point Project?

The store will be located on the base of a building which will have 405-unit rentals. The rental tower is under construction with a completion date of next spring. Brooklyn Harvest will be set to open not long after that, in summer of 2018.

The mega project will be a huge 2 million square feet. It will include seven buildings in total with 2,400 apartments. 20 percent of the apartments will be affordable, according to sources. The Durst project opened ground early last year, however stopped shortly after due to the 421-a-tax break expiration. However the $15 billion project has now commenced once again, since the rental-friendly exemption returned.