A woman died on Monday after being pushed onto the tracks of an oncoming No. 1 train at Times Square station. The woman, according to police was 49 year old Astoria resident Connie Watton. She had been standing on the downtown No. 1 platform at around 1:20PM on November the 7th when Melanie Liverpool-Turner, 30, pushed her straight onto the tracks right before the train arrived. She was standing in the middle of a number of other straphangers when the incident occurred. 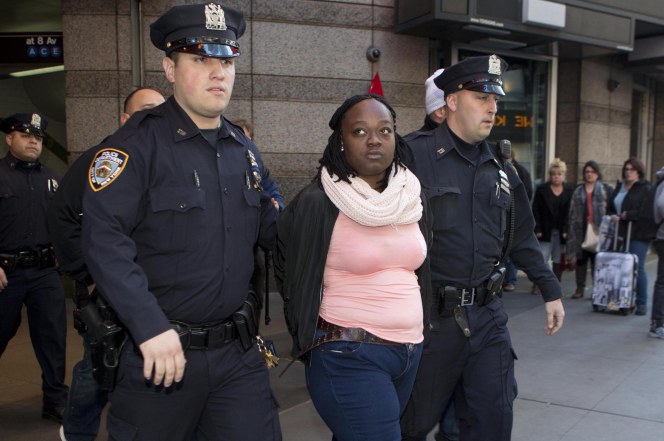 According to Queens Gazette, the two women may have been travelling on a previous train together, however did not appear to know one another. It is still unclear as to whether or not the two had an alteration before hand. Surveillance footage is being sifted through by investigators in hopes it may shed some light on the reason for the vicious act.

Although cases like this are rare, they strike a deep nerve when it comes to New Yorkers.

As police escorted Liverpool-Turner from the scene, she appeared “proud” at what she had done. Officers stated that “her head was up and she looked proud.”

Manhattan Chief of Detectives William Aubry stated “our hearts go out to the victim and the other people who were on the platform and saw this. We have numerous witnesses….People on the platform did exactly what we want them to do. They saw something and said something.”

Liverpool-Turner, who suffers from bipolar disorder and schizophrenia, confessed to the killing and was charged with second-degree murder. She was taken to Belleview Hospital Center for psychiatric examination.

Police hope that the surveillance footage along with anything they can get from Liverpool-Turner can help in determining the reason for such a heinous crime.

Police are also investigating whether or not it was Liverpool-Turner who might have also been responsible for another similar incident last month on Union Square Station.