Strap on for some bumpy weather as Hurricane Hermine might be making her way to New York City with tropical conditions set to last for several days to come, stated the National Weather Service.

Chances are we’ll see some rain and winds pick up late weekend and early next week, however here’s the scoop.

Florida was hit by the storm on Friday, which came as a Category One hurricane, however luckily subsided. The storm is now set to begin moving up north off the east coast. 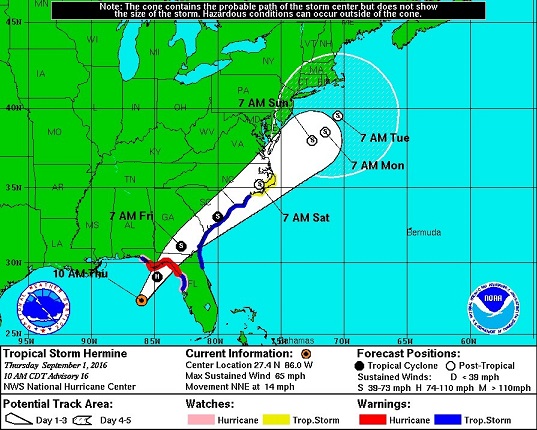 With the storm staying in North Carolina on Saturday, New York should be expecting moderately sunny skies starting off the long weekend, with temperatures of mid to upper 70s.

However by Sunday, the wind will most likely begin picking up and rain will be close on its coat tails by Sunday afternoon with a potential very heavy downpour beginning Sunday night.

Forecasters predict that Hermine will be staying put off New Jersey cost for several days to come, bringing with it 30 to 35 mile per hour winds and excessive rain.

Warnings of a coastal flood have also been issued, high surf and strong rip currents adding to the dangers.

With the storm potentially staying off the coast, New Yorkers may just get tropical storm weather through till Wednesday next week.

Beachgoers in Long Island or anyone planning on a trip from Queens are warned to expect rip currents and heavy rain.