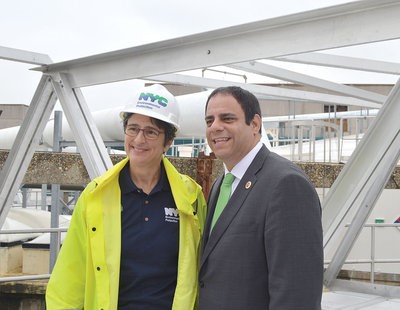 The sights and the sounds of living in Astoria are truly like no other city, apart from the smells emitted from the Bowery Bay Wastewater Treatment Plant for over 80 years. Fortunately for us, City Councilman Costa Constantinides (D-Astoria) teamed up with the City Department of Environmental Protection Acting Commissioner Steven Lawitts to combat the foul odors.

The endeavor focused on four sludge tanks, the source of the repugnant stench, onto which aluminum covers and odor control units were successfully installed. The fetor-remission project started in 2015 and was completed earlier this month.

The $3 million task captures odors emanating from the plant and removes them through an activated carbon filtration process.

“As lifetime residents of the neighborhood, my family and I have too much experience with the odor from the Bowery Bay plant,” Constantinides said. “The new aluminum tank covers and odor control units will help improve the quality of life for all families in the area. Eliminating most of the odor that comes from the plant is a major benefit for our community.”

The Bowery Bay Wastewater Treatment Plant started treating up to 150 million gallons of wastewater a day for the first time in 1939. Neighborhoods in Astoria and East Elmhurst with its 850,000+ residents will continue to benefit from the plant.