Improv to Stand Up 2 Day Workshop 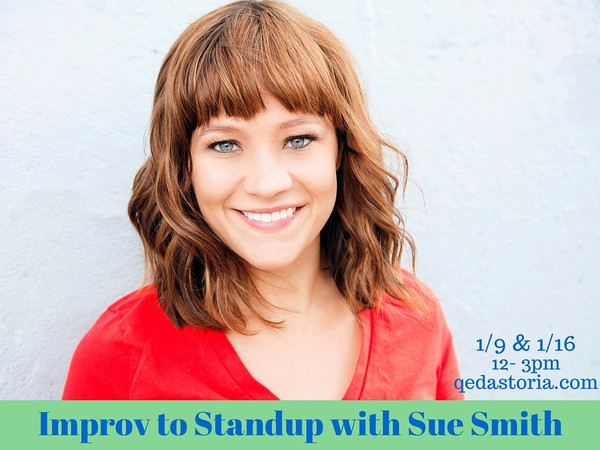 You know you’re funny. You’re an improviser but you’ve always wondered what it would be like to be onstage by yourself, even though it sounds super scary. Let’s make it happen! Improv to Stand-Up is the perfect class for improvisers who want to try stand-up for the first time and for stand-ups who need a little more guidance. In this class, you’ll learn how to harness funny ideas from improv scenes (and life) and translate them into successful jokes. We’ll also cover stand-up basics like joke structure, finding your voice, and how to use a mic stand. (It’s actually pretty tricky. You’d be surprised.) This will be a hilarious, fun, and supportive environment!

Sue Smith teaches improv and acting at New York Film Academy. A veteran improviser and stand-up, Sue has appeared on Best Week Ever, I Love the 2000s, and 40 Greatest Viral Videos on VH1. She’s one of the 10 Funniest Women in NYC, according to Time Out New York. Sue’s performed and studied at the UCB since 2007. In addition to hosting two shows every week, she’s also a correspondent on the Digital house team, UCB1. Her solo character show, Minimum Rage, ran at the UCB on both coasts, was a Time Out Critic’s Pick and was profiled in the New York Daily News. She’s the host of Tits & Giggles, the podcast for women in comedy. Her writing has appeared in xoJane, Brokelyn, VICE and other places that aren’t as hipstery. Sue loves snacks. suesmithcomedy.com

“Sue’s class helped me adapt and transition my improv training to successfully write and perform jokes. The classes and drills were informative. Highly recommend it to people looking to get into standup or try something new.”– Rita Chin