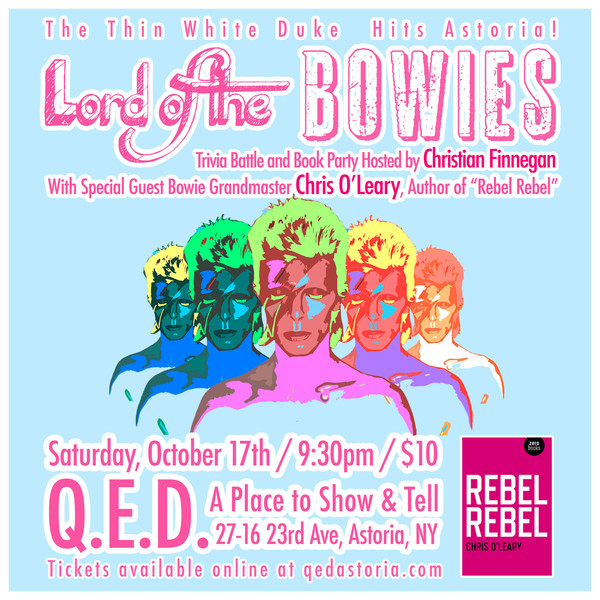 Combining comedy, music and good ol’ fashioned pub trivia, LORD OF THE BOWIES will crown NYC’s biggest Bowie fan. From pansexual spaceman to blue-eyed soul man to elder statesman, all phases of Bowie’s career will be covered. Time to bone up on your Tin Machine!

In addition to the trivia bloodbath, LORD OF THE BOWIES will feature a short audio/visual presentation by O’Leary and some Bowie-related silliness from Finnegan. Once a champion is crowned, O’Leary will sign copies of Rebel Rebel as we drink the night away and discuss Mick Ronson’s mullet.

Space is extremely limited! Tickets are $10 and seating is general admission on a first come first served basis (like going to the movie theater). Tickets can be purchased online or in person at Q.E.D.

CHRISTIAN FINNEGAN is best known as one of the original cast members of VH1’s Best Week Ever and as Chad, the only white roommate from Chappelle Show’s infamous “Mad Real World” sketch. He’s released three albums of standup and his latest one-hour special, The Fun Part, is currently streaming on Netflix. One the 4th Monday of every month, he hosts the popular show “New Release Day”, also at QED.

CHRIS O’LEARY is the creator of “Pushing Ahead of the Dame”, which Time Magazine named one of the “Best Blogs of 2011” and pop music historian Bob Stanley calls “the best writing on David Bowie bar none”. O’Leary’s music writing was recognized in Da Capo’s Best Music Writing of 2010 and he presented at the 2014 EMP Pop Conference in Seattle. Zero Books published O’Leary’s new book Rebel Rebel in March 2015. Learn more about O’Leary at bowiesongs.wordpress.com.