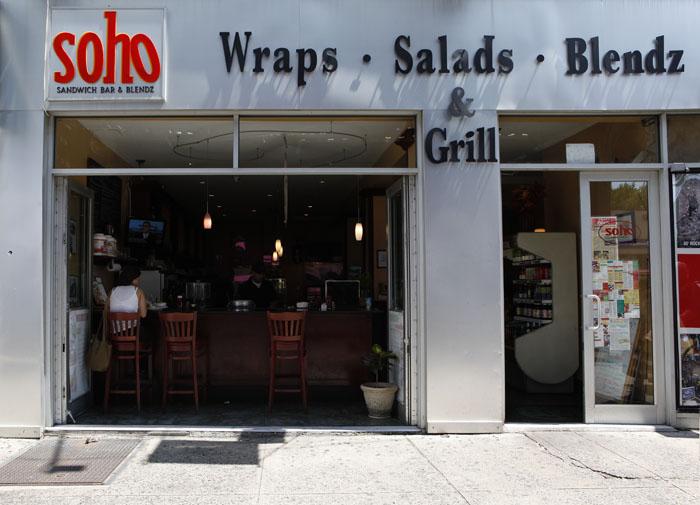 With all the new restauarnts, grills, salad bars and cafes opening up, we like to highlight some of our favorite older spots. One of our favorite places in Astoria to grab a quick, fresh bite is Soho Café and Grill.

Since 2002, Soho has been serving up fresh juices, salads, paninis, wraps, and so much more. We had a chance to chat with Alex Poulous, who owns Soho Café and Grill with partner Peter Garidis,  and he told us a little about their humble beginnings, and their amazing menu.

“When we first opened, Ditmars was a ghost town. The only thing here was Taverna Kyclades. After 7 or 8 years, you began to see a store here or there. We knew from the beginning it would be a hot spot – we just didn’t know when.

The tipping point was MP Taverna. After that, the restaurants started pouring in, along with all the new people moving to Astoria.”

Originally, Soho was owned by the owners of The Rock Fitness Center upstairs, but it had its share of problems.

“There was no gas, and no hot food. They brought me in, and I decided I wanted to change everything. I bought out my partners, brought Peter in, and set out to create something amazing.”

Alex modeled it after another food spot he owned in the Village. In Manhattan, fresh salad and wrap bars were already catching out, and he knew it was a concept he wanted to bring to Astoria.

“We were the first salad bar in Queens that was really focused on fresh ingredients and quick food. We started with the simple things, just soups and salads and smoothies – but our menu kept growing and growing, along with our customer base. Each week it got busier and busier!”

Now boasting a massive menu (seriously, that thing is like six pages long…it would take years to eat everything on it), Soho Café and Grill is consistently one of the best spots for really fresh food.

“It’s a mixture of healthy and not so healthy,” Alex says, “We have salads and fruit smoothies, but we also have great burgers and fries and pancakes. Our menu has something for everyone, and for every craving you can imagine.

So, if you want a good burger? We have one. Want a Panini? We have those, too. Want a salad? You can make 10,000 combinations with our ingredients.”

All their ingredients are fresh, too: they’re Panini bread is baked every morning across the street, and if you’re up early enough, you’ll see the fruit and vegetable vendors stop by with fresh goods each day.

With a menu that changes once a year, it’s almost time for Soho to change it up – and they’ve got some awesome new additions coming. In the next few weeks, you’ll see two big new items: brown rice bowls, and quinoa bowls.

“It’s something we’ve wanted to do for a while,” Alex tells us, “And we came up with lots of different, really unique bowls that are filling and flavorful, each with different ingredients and dressings that make them an amazing meal.

Soho Café and Grill is an awesome place to grab lunch – but they’re also amazing at delivery. Your food comes to you quick and warm (or cold, if that’s how you ordered it!). Plus – they were the first in the neighborhood on Seamless! Always ahead of the curve, they’re a great spot – and this week’s tasty Pick of the Week.