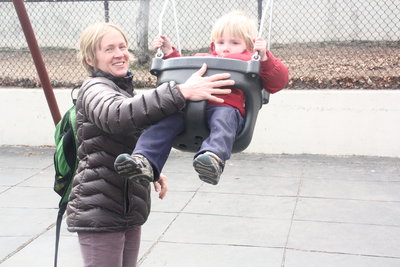 You might remember us telling you about the $1.6 million grant that was issued to Astoria Heights Park, to fix erosion issues, safety issues, and staffing issues. The woman behind it all is Lynn Kennedy, and she’s this week’s Human of the Week!

Lynn and her son/ Queens Ledger

How did you first get involved with Astoria Heights Park?

It all started about a year ago, when my son was just two years old. I would take him to the park a lot, but I found that I didn’t want to go to my local park. I would go to parks further away, because this one didn’t feel safe. I started wondering why I had to travel, when I had a park so  lose by, and I decided to change that.

How did you raise advocacy?

We were lucky, because Friends of Astoria Heights Park was started in a political year. So we had a lot of people listening and a lot of people ready to make a difference. We spoke to the community board and took our complaints from 35th or 36th on the list, to 2nd and 3rd. We had to focus on really specific things: so we chose the erosion issues at the park, and the lack of gates.

Along with those, what other problems did you see in the park?

There was a huge problem with broken glass, and low staffing. We worked really hard to get staffing up, and have made personal connections with the Parks Department, so we can call and let them know if we do see broken glass, or see something hazardous, and they take care of it.

Have you gotten a lot of support?

How are other parents getting involved?

We have lots of events that parents can attend. We also volunteer a lot, and it lets parents really have a sense of ownership over the park. It makes them want to get involved, and keep the park in great shape.

How do you feel knowing you’ve made such a difference?

It really is a wonderful thing. Between being a parent, and a caretaker at home, it was amazng to get outside of my head and do something that was bigger than me. Raising advocacy and have the community rally behind this cause has been such an amazing thing.

Ho w has a cleaner, better park changed the neighborhood?

Public spaces make a huge difference in health, and how people feel. There’s lower speeding, and it just improves the entire neighborhood. There’s a lot of good things about having a beautiful public place. It just makes people feel good. It helps children interact with one another, and brings such a huge audience of people together.