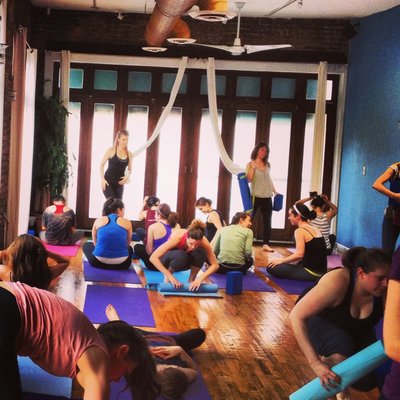 A few years ago, Nick Velkov was in search of a job. His problem, though, was that he wanted a job that gave back to his home community of Astoria, and a job that he loved. His search led him to yoga, and in 2010 Yoga Agora was born. “I wanted to be part of a tribe,” Nick told us, “and I wanted to serve that tribe.” Yoga, he found, was the perfect balance.

In yoga, which means “union,” and comes from the root word “yog,” or “yoke,” such as yoking oxen together,” you meditate through different seated positions. The physical moves are called asanas,which translate to “seat,” and it is these asanas that Yoga Agora’s classes teach.

Yoga, as Nick told us, has three major benefits: physical, mental and spiritual. Physically, yoga strengthens muscles and structures them, aligns bones more properly, and helps prevent certain injuries. It also helps improve balance. The mental benefit of yoga comes through deep breathing, which helps the central nervous system slow down – helping the brain focus optimally with more clarity. As for the spiritual aspect, which Nick says is personal to each person, yoga teaches that there is a connection between all living things, and yoga assists in  feeling a sense of that spirit.

If you’re a yoga veteran, or if you’ve never heard of an asana in your life, Yoga Agora is a center that caters to everyone. There are classes solely for beginner, that teach the basics and move slow, as well as weekend advanced classes. The best part? Classes are just $5. Yoga Agora aims to be a place with no contracts, where anyone can stop by once, twice, or everyday, and still pay the same low price. Basic classes are 60 minutes, and are donation based, while other classes range between 75 and 90 minutes.

Yoga Agora also has some awesome events and workshops, taught by certified yoga teachers. They have workshops like Yin yoga and Vinyasa yoga, which focuses on deep stretches and breathing held for much longer time.

Yoga Agora is an intimate space, with classes nearly always filled. It’s a comfortable atmosphere that never feels judgmental or intimidating, but rather, warm and inviting. It’s extremely convenient located, literally two blocks from the Broadway subway station. It’s a great place to learn about yoga, clear your head, and feel at one with the world.