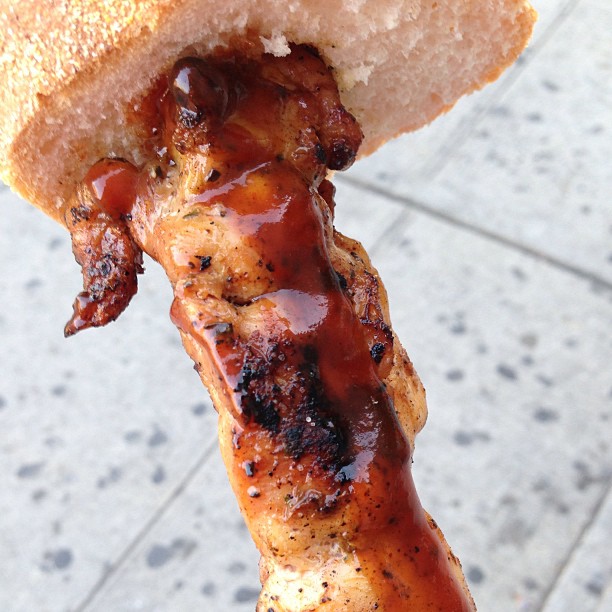 44 years ago, Franky  Englezos father opened up a hotdog stand on Steinway and 31st avenue. Ten years later he transitioned to selling souvlaki, and the stand quickly became a neighborhood favorite. Now run by the eponymous Franky, the team serves up amazing souvlaki to customers with huge smiles and great prices.

Franky tells us the special spice blend in his souvalki was created by his father George, all those years ago, and it was so good it stuck. It’s a taste that people have come to know and love – fresh, tender, and savory.

They’ve got every type of sandwich you could want, and they’ve got a huge array of meat, so there’s something to appeal to everyone.

One of the best sellers is the chicken skewers, and when it’s fresh off the grill and doused in sauce, it is seriously one of the best things ever.

Now, don’t think this is just simple street food. If you’ve had Franky’s Souvlaki, you know it tastes like something you would find in a restaurant – and that’s what keeps people coming back. There are customers that have been coming there since they were little kids with their own parents, and are now bringing their children to the neighborhood favorite.

Franky keeps a small team. He tells us that they don’t have a lot of employees, but the ones that they do have been with them for quite a while. “It’s like a family,” he says, “we want everyone to feel like they’re part of one big family.” And it really does feel like that.  Franky is a born and raised Astorian, and loves the community and it’s people. Some days Franky’s brother will be at the stand, some days his nephew, and sometimes, even his father, who started the legacy nearly half a century ago.

Seasonally, Franky’s Souvlaki has a second cart across the street, but they’ve got some big ideas in the works! Franky is looking to open up a food truck some time in the future, so keep an eye out for that!