King of Falafel: The Friendliest, Funniest, Falafeliest Street Vendor Ever. 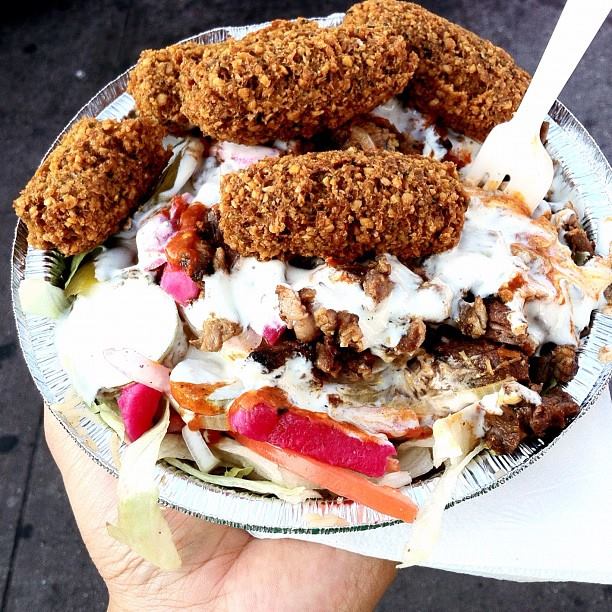 Tasty platter from the King

Freddy is possible one of the friendliest people we’ve ever met. You know when someone has an infectious smile? Freddy’s smile is about as infectious as the plague. (We swear that’s a good thing.) It is impossible to be in a bad mood around Freddy…especially when he serves up such amazing food, shouts his catch phrase YEAH BABY, and gives you free falafel while you wait in line.

The two main commodities are falafel and shawarma, both ridiculously good and fabulously priced. Here’s the difference: falafel is vegan friendly and gluten free– made from just chick peas, onions, garlic, parsley, and a secret spice recipe. (Which we totally badgered Freddy for, but he wouldn’t budge. You can find his similar recipe here). Shawarma, on the other hand, is thinly sliced meat, stacked up and roasted on a spinner. This one’s not so vegan friendly. There’s chicken, beef, and lamb…and you can mix them altogether which is like meat heaven. Don’t forget the sauce, though.

Alright, so we know there’s a LOT of food vendors around, and hundreds of chicken over rice stands…so what makes the King of Falafel special. Here at Give Me Astoria, we’re slightly picky eaters. Not that you could guess that from the amount of food that we eat. But what sets the King apart is his taste. Other vendors buy pre-packaged, pre-seasoned meat, and just chop it up and cook it, but Freddy’s food is literally a work of art.

First, Freddy gets the meat. Then, he slices it up and marinates it in his own traditional blend of 11 different spices (WHICH HE STILL WON’T TELL US), and leaves it to marinate for at least 24 hours. He then puts it on the spinner to roast. When he’s convinced the meat is full of enough flavor, he serves it out.

The thing about Freddy is that he loves what he does, and it shows. Originally from Palestine, Freddy came to America and got a job as a waiter. Then, he drove a cab. After that, he opened up and adorable little coffee shop…and woke up one day, unplugged the phones, and went back to sleep. No more coffee shop. It just wasn’t him. All Freddy wanted to do was serve great food on a street corner, meet new people, put a smile on their face, and food in their stomachs. So he opened up the King of Falafel and Shawarma, and we are damn glad he did.

P.S Make sure you stop by and see Freddy on the King of Falafel and Shawarma’s anniversary– April 18th! He’ll be dishing out meals at the same price he did the first day he opened: $4 chicken platters, $2 falafel sandwiches, 4 falafels for $1, $5 shawarma platters and $3 shawarma sandwiches. We’re literally scheduling this in our calendar. YEAHHHH BABYYYYY.