This week’s Human of the Week is Jason D. Antos, editor of the Queens Gazette, and author of books on Shea Stadium, Whitestone, Flushing, Queens, and most recently, Jackson Heights. 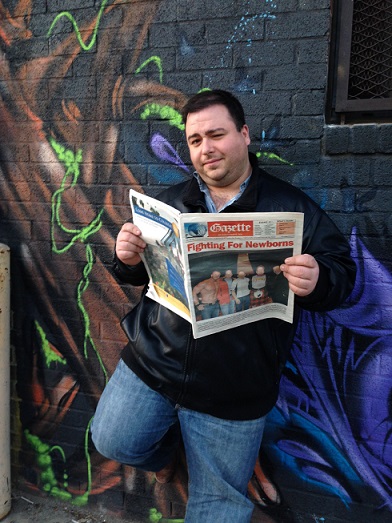 How long have you worked at the Gazette?

What made you get into writing?

Writing and reading were always my strongest subjects. In Kindergarten my favorite subject was the titanic, and I found a book on it. I went to my teacher Mrs. Bernstein and told her I wanted to read it to the class– she asked if I wanted her to read it, but I insisted I had to read it. It went so well she made the whole class do it once a week… the class wasn’t too fond of me after that.

What’s something about newspapers that most people don’t know?

The image that most people have of reporters is what they see in movies like All The President’s Men. It’s not all cool secret contacts and fun stuff– a lot of it is just sitting at a desk making phone calls. But there are extremes, one minute you could be a your desk, the next minute you’re rushing to get the scoop on a crime scene.

How do you gain someone’s trust through the phone?

It’s not easy. You have to be friendly, and come across as trust worthy. People can be shy, and clam up as soon as you start asking questions. You have to make it comfortable for them.

How stressful does being a newspaper reporter get?

It’s pretty stressful– but rewarding, too. The hours are long, you’re working 9 to 5, then covering a story that can take hours, then going home to write the story, then waking up the next morning and repeating. News never stops, and the Gazette is always on top of stories– so if something is happening, we want to cover it start to finish, completely.

Are there any challenges you face when writing a story?

Getting it right is always the main concern, and it can be a challenge. You’ve got to be objective, and never spin a story the wrong way. You also only have about 500 to 700 words to give all the details of a story, and make it interesting. You boil down the story to it’s essence.

What’s the best part of working at The Gazette?

Knowing that I’m working in my chosen profession, what I went to school for and have a passion for. There’s so many reporters out there free lancing and working independently, but I’m lucky enough to be working for a great newspaper.

How did you start writing books?

When I was at the University of Miami I was toying with the idea of publishing a book, and the most popular way is self publishing. I happened to be at Barnes and Noble during Christmas Break of 2005, and saw a book on College Point. I had a light bulb moment, I never realized people would enjoy a book on their local neighborhood.

I found out the publishers of the book were doing an open call for submissions on book ideas, and I sent in a proposal on a book on Whitestone. They accepted, and I put together the book– it was released on October 18, 2005, and sold a thousand copies in two weeks. Since then, I’ve written four more books.

Later, I found out there had NEVER been a book written on Shea Stadium, and set to researching and writing one. It came out on Thanksgiving of 2007 and sold 1,200 copies in three weeks.

Do you have any advice for readers looking to become journalists or reporters?

It’s a wonderful job. The greatest thing about the profession is that you meet so many people you would never have met otherwise. It opens your eyes to things you wouldn’t have seem otherwise, from what’s going on in the suburbs, to all the action that’s happening. You experience so much, and it’s all worth it. With the Queens Gazette, I’ve been reintroduced to my own borough, and learned so much I wouldn’t have if I wasn’t working here. It’s truly an eye opener.

Jason with a proclamation from Congress member Grace Meng in recognition of his books and work to help promote and preserve Queens history.

You can keep up with Jason by picking up the latest copy of The Queens Gazette, or checking out all his books here.