P.S.85 Finally To Get Quieter And Cooler With New Air Conditioners

After years of pleading from parents of students at P.S.85 on 31st Street, air conditioners have finally been installed in the school which sits adjacent to the N/Q tracks. 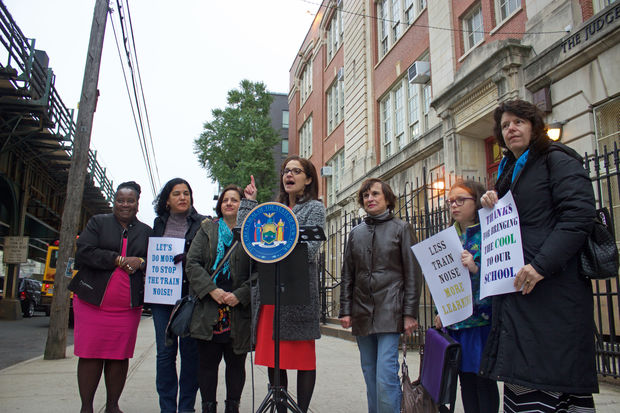 31 units in total have been installed in the elementary school, with another 10 due to come in by the end of the year.

For years now the parents and teachers urged the installations, stating that the students would have a very hard time focusing in the summer while the windows were open due to the trains screeching back and forth outside.

The noise wasn’t the only issue. Students would need to deal with sweltering summer heats as well, which would often disrupt the learning experiences in the classroom. Assemblywoman Aravella Simotas supplied the $125,000 grant for the air conditioners. According to DNAinfo, she said that “the teachers and the students had to choose between feeling comfortable or learning.”

The 31 units were placed in every classroom with windows that face the subway tracks. Classrooms facing the tracks had to deal with the noise issues in their own ways, with student urged to hold up a peace sign letting teachers know when they were unable to hear them.

Co-president of the Parent Association Lisa Chibis-Tapper stated that the entire school stops talking as soon as a train goes by. Causing disruptions in the teaching of the students at P.S.85, reported DNAinfo.

The Department of Education previously tried to muffle the noises. Sound absorbing tiles were placed into the building, and the MTA installed noise mufflers along with other noise reducing features on their train lines. However the problem still persisted.

Former Parent Association head Evie Hantzopoulos praised the schools efforts, saying that “our school does amazingly well and we’ve put up with it……but why should anyone have to put up with something that can be fixed?”

“I don’t think people understand how close the elevated train is to the school, they don’t understand how much it really interrupts the learning’ she said.

The new installations should help keep the noise down, while keeping the students cool in the hotter months.