A local produce market, United Brothers, recently hit it big with a print feature in the New York Times. We love the local staple – especially their fresh, quality offerings, and the service is generally top notch. It’s situated perfectly on 30th Avenue, and we’re glad to see it getting some press!

John Surico, the author of “A Parthenon of Produce at United Brothers Fruit Market in Astoria,” had great things to say.

If Queens is the borough of the world, Astoria is its Mediterranean outpost. On 30th Avenue, where it is easier to order souvlakia on pita than a slice of pizza, and olive oil seems to exist as common currency, you will find United Brothers Fruit Market, the supply store for this enclave along the East River. Its signature yellow bag, a common neighborhood tumbleweed, is carried by Greek grandmothers and hipsters alike.

Met by mist from overhead, nearly 3,000 people troop in and out of this 3,000-square-foot corner store on a daily basis, drawn to the Hass avocados, the yucas, the cauliflower, the tomatillos. And the radicchio, and the endives. On a recent Wednesday evening, Sophia Konstantinides, 65, was one of them. 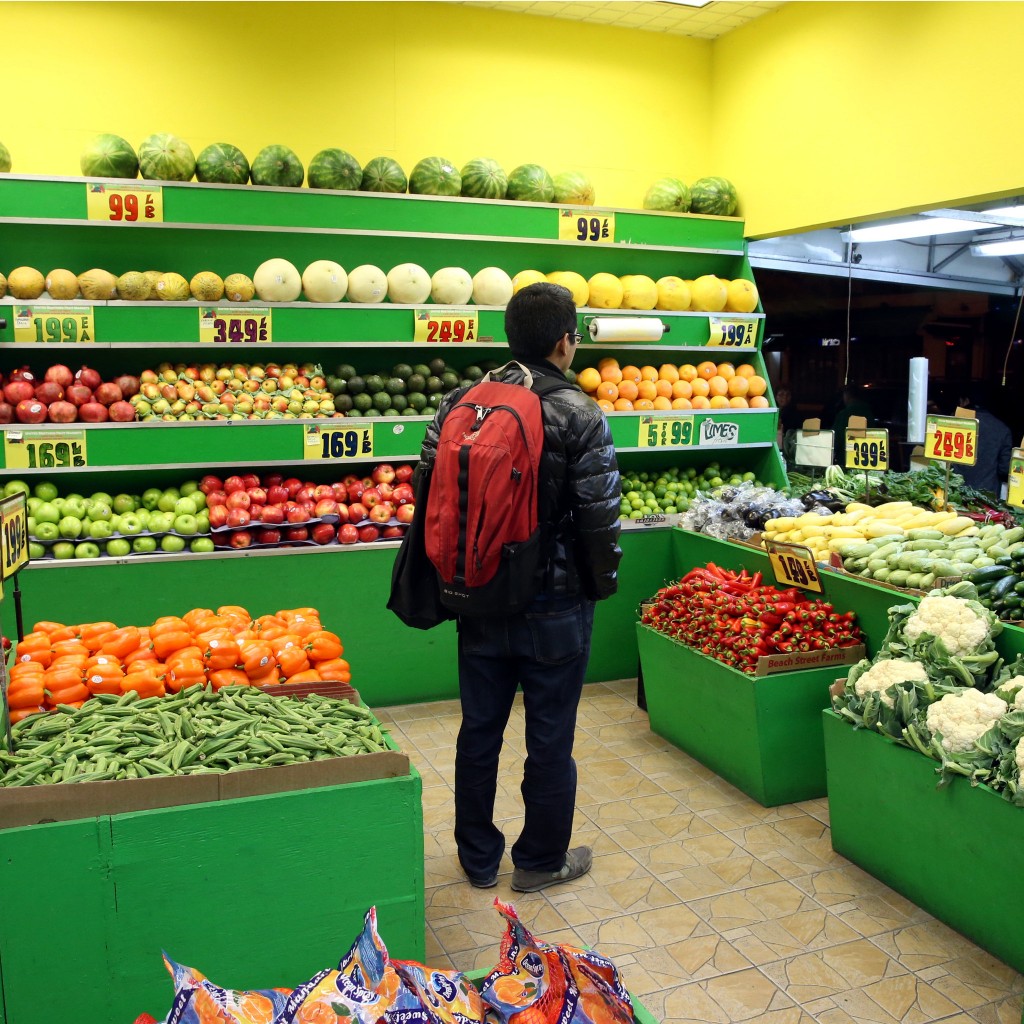 Every day around 11 p.m., Ms. Konstantinides stocks up on vegetables for a late-night dinner and the next day’s leftovers. She lives on Long Island but grew up in Astoria, and United Brothers is the only stop on her way home from her job in Manhattan, where she works late as an insurance broker. “I pop into Queens, do my shopping and then hit the parkway,” she said, cradling a head of broccoli like a bouquet. “It’s like I came home with flowers.”

The market is open 24 hours a day, every day of the year. But even at dawn, a line slinks along 33rd Street, underneath the store’s yellow and green awning. Customers are scrambling to pick up stragglers in the discount bin, where items are 29 cents a pound. Recent bargains: (somewhat soft) red tomatoes, (strangely shaped) blue broccoli and iceberg lettuce (a bit browner than its usual Arctic hue).

All night long, spotlights dimly shine on the brick building above, creating a soft glow over the avenue’s Parthenon of produce. Commuters stream in from the nearby subway to grab a late-night peach, plum or pear, choosing from curbside bins chock-full of them. The more devoted find their way into the Apple House, the McIntosh- and Fuji- and Honeycrisp-filled foyer next door. The annex, which also has a juice bar, went through 30,000 pounds of apples a week last fall and winter. Come May, the Apple House will become the Melon House, its racks laden with cantaloupe and honeydew.

Tom Kourkoumelis, 61, the only United Brothers brother who has not retired to Florida, still spends 10 hours at the store most days, as he has for the better part of four decades (not counting the occasional vacation in Greece). In 1969, Tom and his brothers, Jerry and George, joined the wave of Greeks escaping economic stagnation, island-hopping from Cephalonia to Manhattan, unknowingly alongside two other brothers, Spiro and Damianos Matafias. In New York, the quintet met and sought fruit. But what they found made them long for the old country.

So in 1974, they opened United Brothers Fruit Market in Washington Heights, in Manhattan. Crime led to their second move: They landed in Astoria a few years later.

Vito Genna, 55, sifted through string beans as rush hour cooled down. He has lived in Astoria since 1982 but works in Manhattan, where he has witnessed the spread of the store’s influence. “One guy I worked with in SoHo would come all the way up here from downtown,” he said. “When I was a doorman in the Upper East Side last summer, one of my tenants came home with a United Brothers bag. I said, ‘Hey, you were in my neighborhood!’ ”

It seems even the big names at The New York Times are starting to notice the hidden gems in Astoria – and while some may cry gentrification, we’re happy that finally some locally owned mom and pop shops are getting the same love as new, trendy cafes.