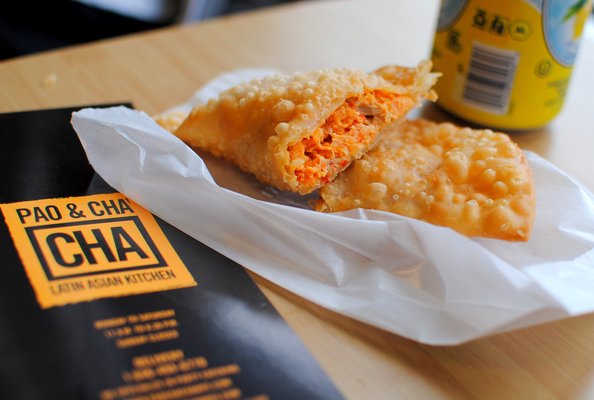 Walking down Astoria Boulevard, it’s easy to miss Pao&Cha Cha. It’s a small space you wouldn’t even catch at first glance…but it’s always the hole in the wall spots that astound you.

When you walk inside, you quickly notice this isn’t a sit down restaurant. That’s not what Pao & Cha Cha is about. They’re about the food – and boy, do they have that down packed.  The food at Pao & Cha Cha is lovingly created by husband and wife duo Guillermo and Mariantonia. The focus is take out and delivery – and unbelievably fresh food.

The cuisine here is Asian fusion – Chinese mixed with Venezuelan. You’ve got to admit – that is a pretty unique mix. Somehow, though, the flavors and spices mix together into a menu that is slightly familiar, and slightly new.

Pao & Cha Cha makes classic empanadas – chicken, beef, and cheese, and molida – which is a mix of beef and chicken.They’re fried fresh and come out absolutely crispy, flakey and filling. We’re partial to the cheese empanadas – especially when they’re still super hot from frying, and the cheese melts when you bite into them.  Also – make sure you pair your empanada with the dipping sauce – it completely transforms them.

While we’re talking about empanadas – let’s switch over to another tiny pocket of food: dumplings. The fusion is clear here: empanadas come from the Venezuelan influence, while dumplings sneak in the Chinese influence. You’d think: Hm…aren’t they pretty much the same type of food? But Guillermo and Mariantonia have designed to be so different, and yet so wonderfully intertwined. The dumplings here are pork, chicken, cheese-zest and veggies – our favorite were the cheese-zest and chicken.

To go with your food, Pao & Cha Cha has a continually stocked fridge of fresh-squeezes juices. Along their wall, they have tiny snacks and candy hung up in little baskets. To the right is their coffee station. They make the best use of their tiny space – with hopes to one day expand.

The crown jewel at Pao & Cha Cha is their Coconut Crusted Fish and Potato Wedges. Astoria, this is absolutely amazing. I am a die-hard coconut lover, but even if you’re not, the taste of coconut is so slight that you can barely put your finger on what tastes so great. On the opposite side of the spectrum, I abhor fish – but after hearing so many good things about the coconut fish, I had to dive in – and I am so glad I did.

If you’re checking out Pao & Cha Cha on the weekend, make sure to throw some ceviche into your order. It’s only made Friday through Saturay, and it’s seriously worth waiting for. During the week, your best bet is delivery of a lunch box, which comes in at right under 10 dollars. There’s three chicken options, and a pork option.

All in all, Pao & Cha Cha makes up for in taste what they lack in space. If you do stop by, it’s impossible to not have Guillermo and Mariantonia put a huge smile on your face with their enthusiasm. They strike up a conversation with everyone, and make it feel like you’ve stepped right off Astoria Boulevard, and into their living room.