No one has ever said Astoria was lacking in Greek cuisine. In fact, in all of New York, Astoria is where you will find some of the best. However, Oli.Vine is not your typical taverna and takes an innovative approach to contemporary Mediterranean fare. Recently joined by executive chef Nicholas Poulmentis, Oli.Vine has distinguished itself in its excellent service, unique food, and rustic boutique restaurant vibe. 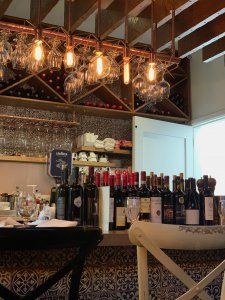 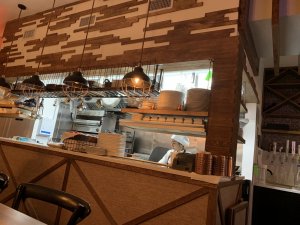 Chef Nicholas describes his cooking style as a “Mediterranean project” with an emphasis on fresh ingredients, and a twist from all over the world. When asked how he comes up with his intricate menus: “inspiration, and a lot of work.” Being in the kitchen isn’t about just working with one product. You have to have the will to make something different and new. It starts as one thing, you add another, and another, until it’s something else entirely. His inspiration is drawn from anything — eating out, watching TV, and even as he sleeps, he is thinking of recipes. 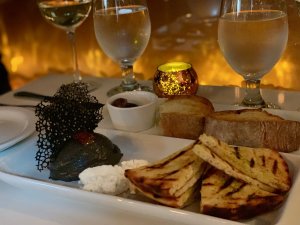 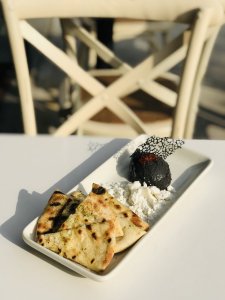 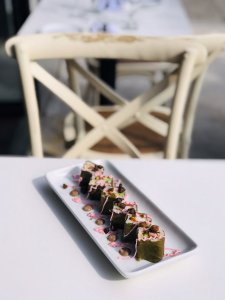 His imaginative goals were definitely met in the food. Everything I tried was delicious and made with a visible creative concept. The Black Tarama was a favorite at the table. It was such a unique take on the classic taramosalata, adding truffle powder (using molecular gastronomy), and octopus ink. Another interesting spin would be Chefs version of a Shrimp Maki Roll wrapped in grape leaves in lieu of nori, a dish recently featured in Forbes. Some starters to try would be the Tomato Keftedes, a light and tasty vegetarian version of a meatball using beefsteak tomatoes as a base, and the Lotus Chips accompanied with a delicious spicy dipping sauce. More favorites include Pita Skakiani (chefs #1 recommendation from the menu) which completely did not disappoint. The homemade phyllo is made to order and stuffed with feta, gorgonzola, honey, and poppy seeds. The Shrimp Loukoumades were perfectly battered and served with that spicy aioli we swooned over. The Brussel Sprouts were also incredibly flavorful, and the Grilled Branzino was simply made and cooked to perfection showcasing the quality of ingredients. 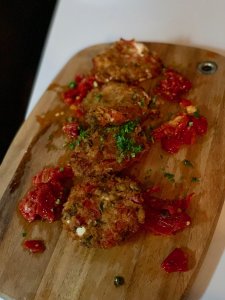 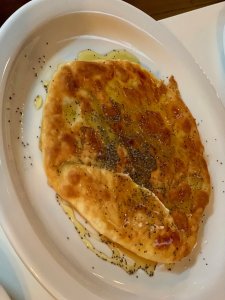 Dining here was an experience. The service was impeccable with an attentive and friendly staff eager to explain the dishes. Even the dessert had a story. Just as a common after dinner tradition is to have cognac and cigars, the concept here was similar. The Kataifi Cigar is shredded phyllo dough shaped like a cigar, filled with rich chocolate mouse and nutella ashes. Coffee for two? Watch it be brewed right in front of you in a chemex. The pairing together made for an excellent finale. 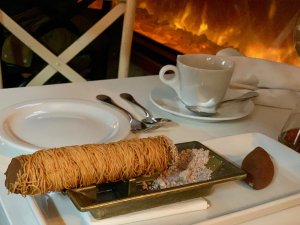 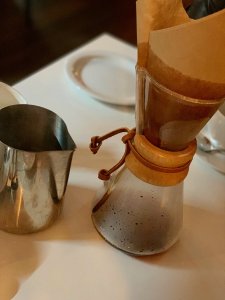 Chef Nicholas was born in NYC, but was raised on the Greek island of Kythira. He studied at the S.T.E. Anavyssos (the leading culinary school in Greece) and at Le Cordon Bleu (a French culinary school). Poulmentis career is long and impressive. With 20 years of experience some highlights include cooking at the White House both in 2013 and 2015, as well as competing in the Food Network show Chopped, receiving praises from Martha Stewart and winning the 10,000 grand prize. Poulmentis said he fell from under his feet when they announced him the winner. Since then, Chef Nicholas has returned to compete on Chopped Champions, and worked in other notable restaurants including Kellari, Theos, and Akrotiri here in Astoria. 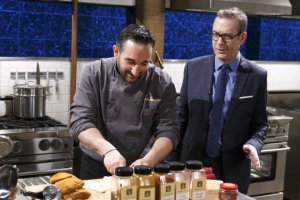 Making this Chefs Nicholas’s second restaurant in Astoria, one has to ask…Why Astoria? Why chose us instead of some high profile restaurant in Manhattan. “Astoria is special because it keeps traditional mediterranean food with simplicity.” It also doesn’t hurt that there is a large Greek community. Whatever the reasoning, we are happy that you decided to settle here Chef. Be sure to check out Oli.Vine next chance you get and stay tuned for the debut of the back patio for some great dining al fresco.