Vintage Trains are Ready to Ride! 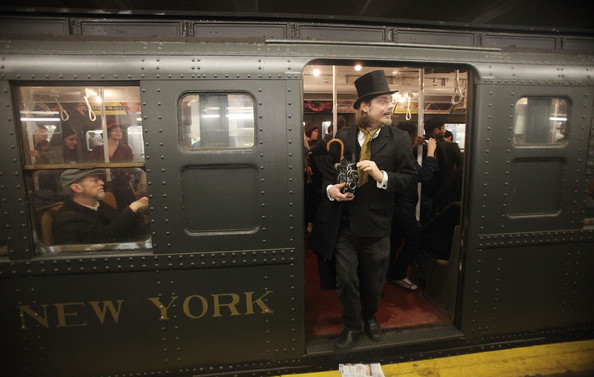 Once again this holiday season, the MTA will offer nostalgia lovers the opportunity to the ride back into the past with rides on vintage buses and subway trains. There’s no better way to get around while doing your holiday shopping! Dating back to the early part of last century, the Nostalgia Train is made up of subway cars in service along the lettered lines between the early1930s to the mid-1970s. Equipped with ceiling fans, padded seats and incandescent light bulbs, the R/1 through R/9 cars served the IND and later some BMT lines. Customers will have the opportunity to hop on board as it operates along the Sixth Avenue

“Holiday shoppers, tourists and those who just remember a bygone era will have the opportunity to experience a ride on a subway train from yesteryear, said MTA New York City President Carmen Bianco. “With a little bit of luck and good timing, riders will be able to catch a ride on this classic subway train at stations along the

Many New Yorkers bear fond memories of the trains. However, with the cars having been out of service for nearly 40 years, many more New Yorkers have never experienced the charm of wicker seats and ceiling fans. The holiday “Nostalgia Train” will operate on Sundays only, between the hours of 10 a.m. and 5 p.m., on November 30, December 7, 14, 21, and 28.

Car No. 100 — Manufactured by American Car and Foundry, this R1-type car was the first car in the initial order of 300 cars placed in service for the opening of the IND subway.

Car No. 484 — Part of a 500-car order of R4 cars manufactured by American Car & Foundry. In 1946, this car received a retrofit of bulls-eye lighting and a public address system.

Car No. 1575 – Originally manufactured as an R7, this car was involved in a wreck in 1946. Sent to the American Car & Foundry factory, the car, which is equipped with fluorescent lighting and smooth sides, was rebuilt as the prototype of the next generation R10 subway car.